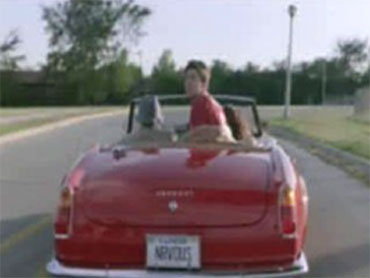 You have a chance to own an iconic piece of Chicago film history, if you have at least $45,000 to spare.

Ferris Bueller's Ferrari is going up for auction in London on April 19, reports CBS station WBBM in Chicago.

The car works and is ready to drive. But there is one catch - it's not a real Ferrari.

The car is actually a replica of the Ferrari 250GT Spyder California that was specially created for the1986 movie "Ferris Bueller's Day Off."

"Only around one hundred genuine 250GT Spyder Californias were created by Ferrari between 1958 and 1963," Bonhams says. "Existing examples are very rare and expensive so Paramount chose to commission and build a replica for filming purposes."

In the movie, Ferris Bueller (Matthew Broderick) persuades his friend Cameron (Alan Ruck) to let them use his father's restored 1961 Ferrari to drive into Chicago from the suburbs. They leave the car with two parking attendants, who take it on a joyride while they're gone.

On their way home, upon noticing that hundreds of miles have been added to the odometer, Bueller tries to run the car in reverse in hopes that the odometer will begin taking miles off. The plan fails, and the car later crashes through a glass wall and ends up in a ravine.

But not to worry. The auctioneer wants everyone to know that the Ferrari replica up for sale is not the one that was wrecked and reduced to a husk, MovieLine.com reported.

Local Video from CBS 2 in Chicago