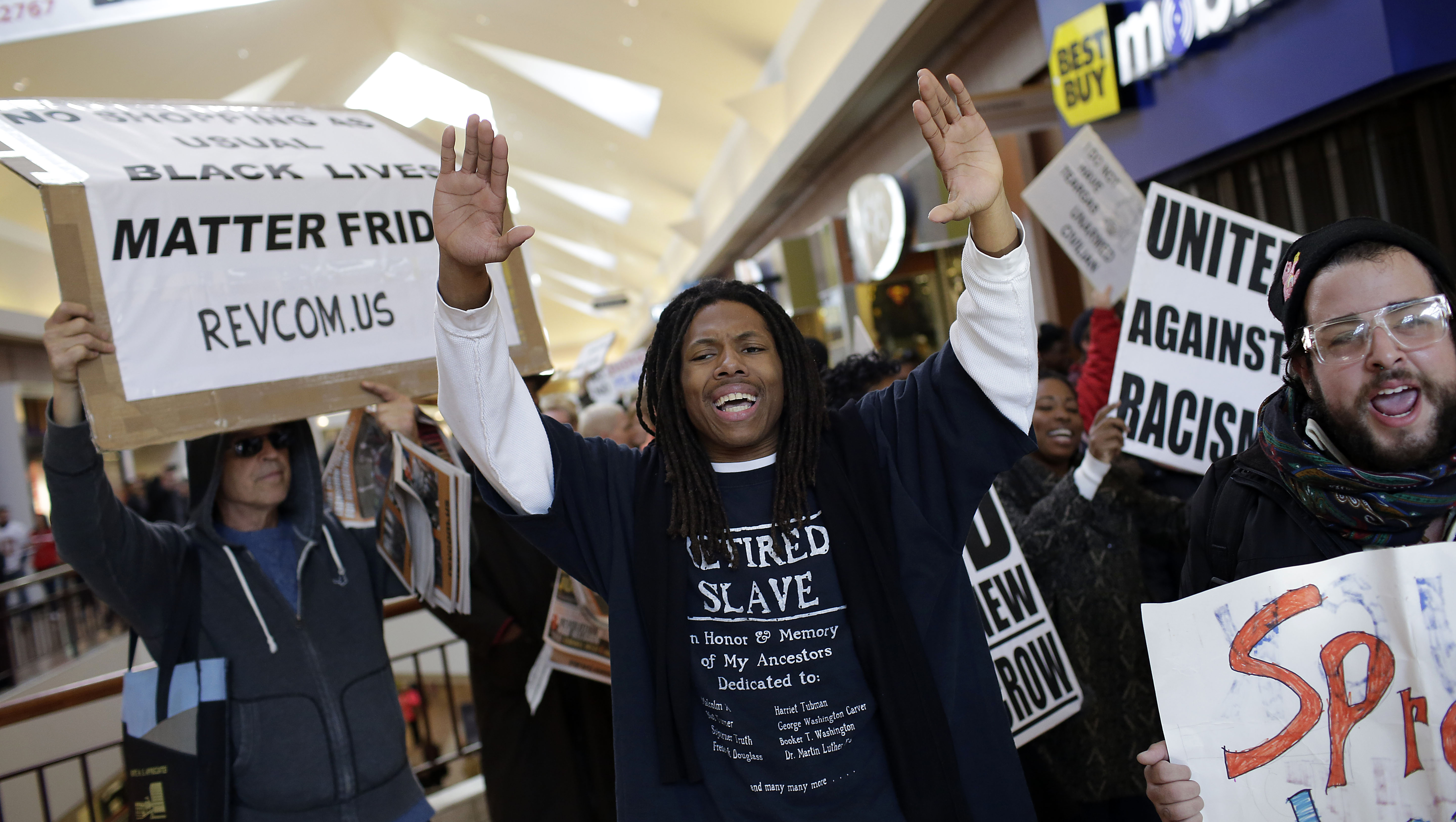 FERGUSON, Mo. -- Demonstrators temporarily shut down two large malls in suburban St. Louis on one of the busiest shopping days of the year Friday, as rallies were held nationwide to protest a grand jury's recent decision not to indict the police officer who fatally shot 18-year-old Michael Brown in nearby Ferguson.

Several stores lowered their security doors or locked entrances as at least 200 protesters sprawled onto the floor while chanting, "Stop shopping and join the movement" at the Galleria mall in Richmond Heights, about 10 miles south of Ferguson.

The protest prompted authorities to close the mall for about an hour Friday afternoon, while a similar protest of about 50 people had the same effect at West County Mall in nearby Des Peres. It didn't appear that any arrests were made.

The protests were among the largest in the country on Black Friday, along with rallies in Chicago, New York, Seattle, northern California and elsewhere.

In nearby Times Square, about 100 people protesting chanted "Hands up, don't shop" and carried signs that read: "End Racism" and "Black Lives Matter." They walked on pedestrian plazas and weren't blocking traffic. Most of the tourists were shopping as usual but some stopped to watch.

Demonstrations continued in and around Ferguson, where officer Darren Wilson fatally shot the 18-year-old Brown, who was unarmed, in August.

"We want to really let the world know that it is no longer business as usual," Chenjerai Kumanyika, an assistant professor at Clemson University in South Carolina, said at a rally at a Wal-Mart in Manchester, another St. Louis suburb.

Duthiers reports that, using the hashtags #blackoutblackfriday and #notonedime, activists took to social media and urged people to use the power of their pocketbooks to direct their holiday shopping exclusively to black-owned businesses.

"It's standing up and coming out to these events and showing support and meeting people and organizing, you know, all of that is going to take a stand," protester Dionne Hamilton told CBS News.

The buying power of African-Americans is estimated to be about $1 trillion a year, Duthiers reports. The hope among protest leaders is that funneling some of that money away from corporate America could speak louder than the protests have so far.

Monday night's announcement that Wilson, who is white, wouldn't be indicted for fatally shooting Brown, who was black, prompted violent protests that resulted in about a dozen buildings and some cars being burned. Dozens of people were arrested.

One town hit hard by Monday's violence was re-opened to traffic Friday. Eighteen businesses were burned or looted in Dellwood, Missouri, Duthiers reports. The city is asking for government aid to rebuild.

Jenience Andrews is among those hoping for help. She lost her life savings when her antique store was burned to the ground.

People like Andrews who want to rebuild may be getting some help. On Friday, Gov. Jay Nixon announced more than $600,000 in zero-interest loans will be made available to businesses to help them get back on their feet.

The rallies have been ongoing but have grown more peaceful this week, as protesters turn their attention to disrupting commerce.

Mindy Elledge, who runs a watch kiosk at the Galleria, said it was working.

"I think people are afraid to come here," Elledge said. "With the protests going on, you never know when or where they're going to happen."

In northern California, more than a dozen people were arrested after about 125 protesters wearing T-shirts that read "Black Lives Matter" interrupted train service from Oakland to San Francisco, with some chaining themselves to trains. Dozens of people in Seattle blocked streets, and some protesters also apparently chained doors shut at the nearby Pacific Place shopping center.

In Chicago, about 200 people gathered near the city's popular Magnificent Mile shopping district, where Kristiana Colon, 28, called Friday "a day of awareness and engagement." She's a member of the Let Us Breathe Collective, which has been taking supplies such as gas masks to protesters in Ferguson.

"We want them to think twice before spending that dollar today," she said of shoppers. "As long as black lives are put second to materialism, there will be no peace."

Malcolm London, a leader in the Black Youth Project 100, which has been organizing Chicago protests, said the group was also trying to rally support for other issues, such as more transparency from Chicago police.

Other planned events around the country seemed relatively brief and thinly attended in contrast to the large demonstrations earlier this week. In Brooklyn, New York, a "Hands Up, Don't Shop" protest had been scheduled, but no one materialized.

At a shopping center in the St. Louis suburb of Kirkwood, a dozen people gathered and chanted "Black lives matter." Security was heightened at the Wal-Mart in Ferguson on Friday morning, with military Humvees, police cars and security guards on patrol. The store was busy, but there were no protesters.