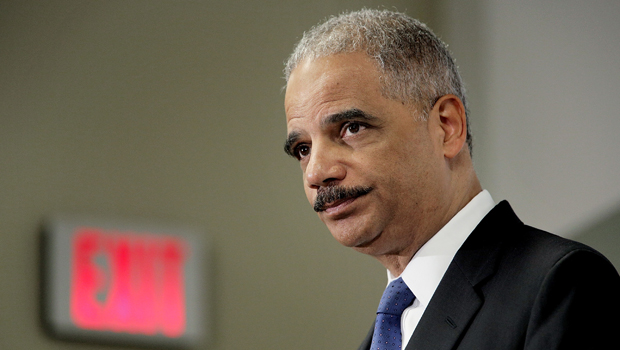 Attorney General Eric Holder told Justice Department lawyers that he was "exasperated" about leaks from the federal investigation into last summer's police shooting of an unarmed 18-year-old in a St. Louis suburb, a Justice official told CBS News Thursday.

Holder's comments come days after The New York Times reported that the Ferguson, Missouri, police officer who fatally shot Michael Brown told investigators that he was in fear for his life as they struggled over the officer's gun.

At a meeting of Justice lawyers Wednesday, Holder said he was "exasperated" at the "selective flow of information coming out of Missouri," and he called the leaks "inappropriate and troubling," the Justice official told CBS News.

A department spokeswoman told CBS News that since Ferguson Police Chief Thomas Jackson released surveillance camera footage from a convenience store robbery before Brown was shot "there seems to be an inappropriate effort to influence public opinion about this case."

"The department considers the selective release of information in this investigation to be irresponsible and highly troubling," Justice Department spokeswoman Dena Iverson said in a statement.

Ferguson police officer Darren Wilson told authorities that Brown reached for the gun during a scuffle, the Times reported in a story posted on its website Friday night. The officer's account to authorities did not explain why he fired at Brown multiple times after emerging from his vehicle, according to the newspaper.

The Times reported that the account of Wilson's version of events came from government officials briefed on the federal civil rights investigation into the Aug. 9 shooting that sparked racial unrest and weeks of protests, some of which turned violent. Wilson is white and Brown black.

Wilson confronted Brown and a friend while they were walking back to Brown's home from a convenience store. After the shooting, Brown died at the scene. Some witnesses have told authorities and news media that Brown had his hands raised when Wilson approached with his weapon and fired repeatedly. An independent autopsy commissioned by the family says that Brown was shot at least six times, including twice in the head.

Benjamin Crump, the attorney for Brown's parents, told The Associated Press on Saturday that the officer's account of what happened was "self-serving."

"The officer is going to say whatever he has to say to try to justify killing an unarmed teenager," Crump said. "And certainly, his statement should not be taken above independent eye witnesses who are completely unbiased when he has every reason to be biased."

Crump also said that because there were reports that Michael Brown was shot while he ran away, it "doesn't matter" what happened in the car beforehand.

"He was definitely not in fear of threat when Michael Brown was running away from him," Crump said.

The Times reported that Wilson has told investigators that he was trying to leave his SUV when Brown pushed him back in and that once inside the vehicle the two began to fight. Wilson told authorities that Brown punched and scratched him repeatedly, leaving swelling on his face and cuts on his neck, the Times reported.

Wilson, who had been patrolling Ferguson for nearly three years, was placed on leave after the shooting. A state grand jury is considering charges against him.

The Justice Department is investigating the Ferguson Police Department for possible civil rights violations, including whether officers there use excessive force and engage in discriminatory practices. Two-thirds of Ferguson's 21,000 residents are black but only three of its more than 50 police officers are black.

Brian Schellman, a spokesman for St. Louis County Police, which has taken control of Ferguson security, said in an email that the department doesn't comment on active investigations.