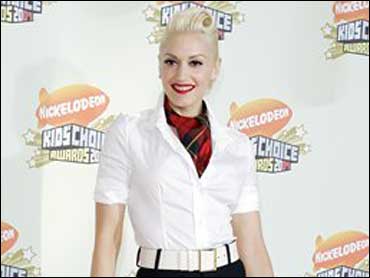 A woman's best bet for spring fashion success? It's still the dress.

But the spring 2008 styles shown at Wednesday's opening of New York Fashion Week were more loose and feminine than the ladylike, polished fall fashions now in stores.

Dresses have been a strong trend the past three fashion cycles, but what started with short, boxy shifts in the spring morphed into shirtdresses for fall. It seems next season's shape -- at least in early shows -- is a loose sheath, one that glides over an hourglass shape without sticking to it.

Gwen Stefani's L.A.M.B. collection was the most highly stylized of the day. The clothes ranged from retro mod frocks to wearable-yet-sexy sheath dresses, all shooting out onto the runway against a black-and-white video backdrop on models wearing clunky heels.

The palette was almost entirely black and white.

A handful of the outfits were costumey -- particularly a double-breasted coat that she called the Abingdon Road coat and a pair of matching short shorts. Stefani might be able to pull this off onstage, but the average woman would have trouble wearing it, no matter how cute it looked on the runway. Overall, though, Stefani, along with stylist Andrea Lieberman, offered several looks that were in step with her young, hip customer, including a military-inspired jacket with a peekaboo neckline worn with a plaid pleated dress and a houndstooth beaded shift dress with a pleated cape jacket.

Marchesa is a label that has quickly become a big player on the red carpet. It went for drama with its newest collection.

"That's a goddess dress," gushed Candy Pratts Price, executive fashion editor at Style.com, when she spotted a long, black, lace-and-tulle slipdress with embroidery, an ivory underlay and ribbon detail at the empire waist.

A strapless gown made of tulle and covered with gold embroidery was equally impressive, maintaining an appearance of delicacy under a hefty amount of metal.

Pratts Price also noted a group of Indian-inspired outfits decorated with gold applique details. Many of the colors seemed rooted in the spices of the region, including lemongrass and saffron.

However, one of the most noteworthy gowns was a magenta strapless gown that mimicked an unfurling flower, with uneven petals of fabric. The gown surely would be stunning on one of Keren Craig and Georgina Champman's starlet fans, but one has to wonder how that wearer would ever be able to sit.

Other dresses appeared to be courting a tougher chick than Marchesa's typical customer, especially some form-fitting shorter dresses with mirrored beads and strategically placed cutouts.

Welcome to the softer side of Tahari.

Elie Tahari chose to present his spring collection Wednesday in a white space -- decorated with patches of green leaves and ethereal dresses -- instead of the nearby bustling Bryant Park tents.

The Tahari label is best known for its tailored pieces, especially its well-fitting women's trousers, and they will indeed be offered next season, but the designer said it was time to highlight the long, fluid look.

"It's happy," he said, adding that the inspiration was global travels but not a specific place: "Pick anywhere in your imagination."

Floral-print caftans and deconstructed safari jackets outfitted the mannequins as did loose floor-skimming sundresses -- they were probably too casual to be called gowns -- in desert colors.

Menswear is a part of the collection, too, and the inspiration there was sporting influences. The intention, he said, was to offer versatile styles that can move from the urban landscape to weekend excursions.

One delicate dress floated down the runway after another at the preview of BCBG Max Azria's spring collection. The best part: many were wearable.

The femininity came from the fabrics, mostly organza and tulle, in a subtle dusty palette with only the occasional pop of a blush pink. Because some of the dresses would have been sheer on their own, the husband-wife design team of Max and Lubov Azria layered them, often with a silk slipdress under a wrap dress or one with panels.

One of the best looks was the first. They called it a trenchcoat -- but most would probably consider the gravel-colored organza garment a coatdress -- that was worn over a tulle slipdress and nipped at the waist with a leather wrap belt.

BCBG's young fans in the entertainment world turned out to the tents at Bryant Park, where Azria will also show his signature upscale collection Friday. Ashlee Simpson, Sophia Bush and Ciara were in the front row, as was tennis star Martina Hingis.

"It was all very pretty," Hingis said after the show. "The satin -- that was really nice."

There can be something very sexy about being covered up.

The look at the Abaete show was inspired by the screen sirens of the 1940s and particularly Gene Tierney, according to designer Laura Poretzky. It was like Poretzky transported Tierney, who was at one time married to the late legendary fashion designer Oleg Cassini, and all her friends -- Rita Hayworth and Jean Harlow, among them -- to Miami where they sipped cocktails and soaked up the Deco-era architecture.

Among the tempting looks to be offered next spring were a halter-neck striped dress in pink and navy with similarly colored patches of fabric near the hem, and a sand-and-peach-colored sheath dress that would hug an hourglass figure.

Women who invested in the wide-leg look for fall will be able to keep those pants at least another season.

Another likely continuing trend is the flat shoe. Poretzky has a deal with Payless to create affordable shoes; the best for spring was called the Hayworth, with a ruched pleated upper and round peep-toe front.

Designers Hanii Y and Gene Kei wanted their spring Y & Kei collection to transform the ideals of the 1960s into something a little more modern and sexy.

"It's a reinterpretation of beautiful ... peace, love and freedom," Kei, who is Korean, said through an interpreter during a presentation in the lower level of the New York Public Library.

Models took turns circling each other in a dim room, wearing chemise dresses with dramatic details -- scores of silver fabric scallops on one, a fringed shawl on another. It's a look that worked best on eveningwear, with a black chiffon and crepe jacket with a black sequin and caviar-beaded short sleeve dress the most special outfit of all.

A sheer black chiffon anorak jacket over a cream-colored gown with an Art Deco motif on the chest also would work for the designers' "urban hippie" muse.

The men who wear Perry Ellis might need a tutorial in fabrics when they go to buy their spring clothes.

Instead of introducing any groundbreaking shifts in design on the runway, designer John Crocco experimented with different textures and fabrics.

A bamboo-fiber utility shirt in bright yellow was paired with stretch cotton pinstripe trousers -- and the model also wore a turtleneck sweater made of a blend of wool, cashmere and silk tied around his waist. A see-through, essentially colorless jacket made of a poly-resin blend topped a polo shirt that mixed pima and modal cotton.

The collection had a vacation vibe, somewhat of a departure for a label that's a fixture in department store's suit sections. Some of the best looks featured linen cargo pants with a rope belt paired with cotton awning-stripe shirts or a light, loose sweater.

Nautica launched New York Fashion Week on Wednesday morning with a potential debate: Will hemlines be a relevant issue to men next spring?

Many of the crisp twill pants were worn just above the ankle and the shorts hit mid-thigh, shorter than Bermudas but longer than athletic shorts.

Even the one classic three-piece suit, done in a navy pinstripe, had a shorter than average hem. But what really caught the eye was the linen banded collar shirt worn underneath that helped this handsome outfit straddle a warm-weather casual look and business-appropriate refinement.

Dressy outfits were, though, far and few between. Swimsuits dominated the collection -- the brand name is Nautica, after all -- and those mostly hit the knee like the board shorts the surfers wear.

But the overall look here was more European sailor than surfer. The colors were American with red, white and blue and pops of yellow and silver, but the fitted striped T-shirts, colorful scarves and pocket squares had flair and flamboyance.