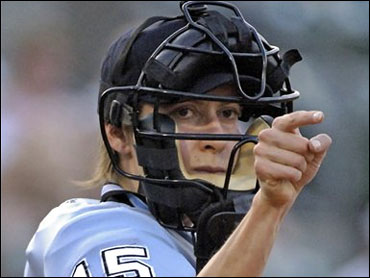 A rookie fresh from the minors is about to change the face of baseball: A female umpire is set to work a major league exhibition game for the first time in almost 20 years.

Ria Cortesio, ready to start the season in Double-A, will be on the bases Thursday for a game between the Arizona Diamondbacks and Chicago Cubs in Mesa, Ariz.

"I'm looking forward to it," she said Monday night. "There will be a lot more people in the stands than I'm used to."

No female umpire has ever worked in the majors during the regular season. Pam Postema was the last woman ump to call big-league exhibitions, back in 1989 — she was in spring training for two years before getting released.

Cortesio is the only female umpire in professional baseball. At 30, she is starting her ninth year overall and fifth in Double-A.

Slender and athletic, she cut her ponytail a few years ago so she wouldn't stand out on the field. She also uses a low grunt to call strikes.

"It's awesome," Cubs star Derrek Lee said. "I think it's about time. Female eyes are as good as male eyes. Why can't they be umpires? Good for her."

"I was kind of expecting it," Cortesio said. "Umpires with my seniority usually get picked."

Cortesio has been working minor-league exhibition games in Arizona this month. This week, she'll move over to HoHoKam Park when a Diamondbacks split squad plays Chicago.

"If she rings somebody up for me, I don't care. You know what I mean? I wouldn't have a problem with it," he said.

Cortesio was on a big-league field last season for All-Star festivities at PNC Park in Pittsburgh. She called the Futures Game for minor-league prospects, then worked the Home Run Derby the next night.

Cortesio started her umpiring career in the Pioneer League, yet doesn't trumpet herself as a pioneer in a profession dominated by men.

"I don't do this job to get on TV," she said last July. "But I hope it will raise the awareness a little."

She later worked in the Florida State League. There, New York Yankees owner George Steinbrenner once criticized her strike zone after she worked a game that Roger Clemens pitched while recuperating from an injury.

For several years, she's been an instructor at the Jim Evans Academy of Professional Umpiring.

This year, Cortesio hopes to move to Triple-A — she's on deck for promotion when the next vacancy occurs. Once umpires reach Triple-A, they are evaluated by major league supervisors, rather than minor-league staff.

Plus, there's the travel. Major league umpires jet around the country, a three-person crew in the Southern League drives itself 24,000 miles over a full season.

All that, and no guarantee they'll ever make the majors because jobs rarely open up. A player in Double-A has a much better chance of reaching the big leagues than an umpire.

"I think I'm as excited about that as anything," she said.