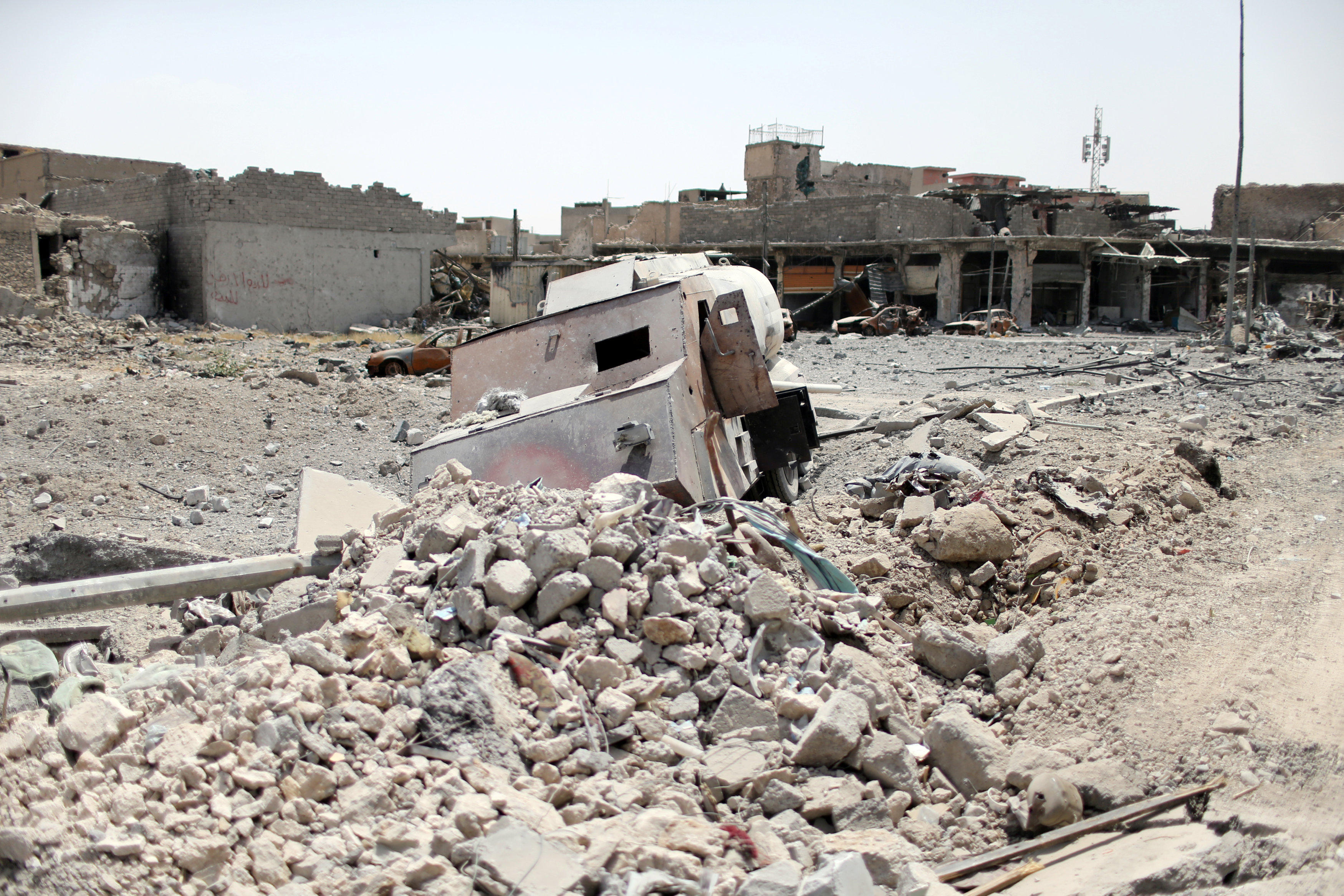 At least one Iraqi soldier was killed and five were wounded in the two separate suicide attacks, the military said. On Sunday, a bomber in women's clothing killed 14 people at a camp for displaced residents in Anbar province, a provincial official said.

The militants "have nowhere to go. They're trapped," he said.

Monday's two suicide bombings against Iraqi soldiers followed three other such attacks by women - some of them teenagers - in the previous two days, said Sgt. Ali Abdullah Hussein.

A soldier displayed the school ID card retrieved from the body of one of the bombers, showing her to be only 15. The photo was of serious young woman in a white hijab and indicated she had studied in Bangladesh.

"Most of the people who blew themselves up today are women," said special forces Lt. Col. Salam Hussein. He added that seven women strapped with explosives approached the troops Monday, "but thank God, our units stopped (them)."

Government troops advancing through the Old City were using rougher tactics to clear the remaining pockets of ISIS forces.

The tempo of airstrikes was so great Monday that coalition aircraft couldn't keep up with the requests for air support from Iraqi ground forces. Instead, they sought approval for artillery strikes.

While shops have reopened and civilian traffic fills streets in retaken neighborhoods, thick black smoke continued to rise just a few kilometers away from ISIS-held territory on the bank of the Tigris River that divides Iraq's second-largest city. The area controlled by the militants is less than half a square mile.

ISIS militants swiftly overran Mosul in 2014. The U.S.-backed offensive to retake the city was launched in October and has proceeded slowly, even though Iraqi political and military officials had vowed to declare victory by the end of 2016.

Iraqi forces began their push to retake the Old City in mid-June.

Even though the militants are squeezed into smaller and smaller territory, the danger remains for units like Fadil's.

When they heard cries from civilians just around the corner, he and his colleagues rushed their commanding officer to safety into a nearby home that already had been cleared. They yelled at the group of sobbing women and children to hurry past.

Fadil explained the reason for their caution.

"They cry and then - boom! They explode themselves," he said. "The closer we get to victory, the more suicide bombers they will send."

At one screening point, soldiers anxiously held civilians back at gunpoint, shouting at men and boys to strip to their underwear.

Hussein, of the special forces, and a group of about a dozen men searched on foot Monday for more suicide bombers. An informant pointed out a house occupied by ISIS fighters.

A solider kicked in a door, shouted a warning and threw two grenades into the front room. A second solider stuffed a rag into a plastic jug of gasoline, lit it and threw it inside.

"There are some suicide bombers who refuse to leave the houses, so we're forced to deal with them with smoke and fire and hand grenades," Hussein said, noting that the troops burned only the basement, not the house.

His men seized five suspected ISIS fighters, binding their hands with electrical wire and blindfolding them with scraps of cloth. At least one of the five was arrested.

For most of the soldiers in Mosul, the final days of the grueling battle caps more than three years of fighting the militants.

Hassan Ahmed, a solider with the special forces deployed in the Old City, said he can't deny that the war has changed him.

"It's like I'm heartless - I don't feel anything," he said. "But we are still good people. We have mercy."