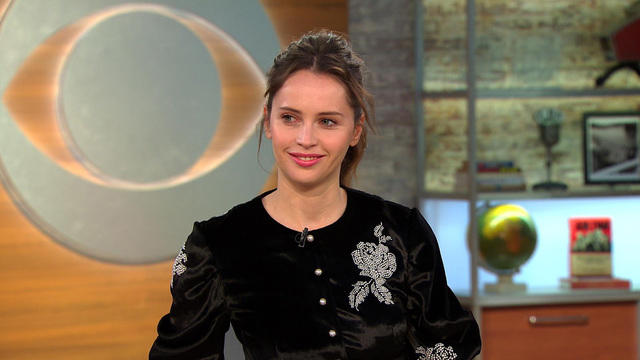 Felicity Jones is no stranger to playing strong women. The British actress earned an Oscar nomination for her portrayal of Stephen Hawking's first wife in "The Theory of Everything" but even she was a bit nervous to take on playing the beloved figure Ruth Bader Ginsburg – the Notorious R.B.G.

"I mean, she's such a loved figure. She's so deeply revered. So definitely at first it was a little intimidating taking on the 'Notorious RBG.' But we spent time in Washington. We went over before we started shooting and had a bit of time just to get to know each other on a personal level," Jones told "CBS This Morning."

"On the Basis of Sex" tracks Ginsburg's early career as a lawyer and her struggle to take a milestone gender discrimination case to the Supreme Court alongside her husband.

"We all went to her office and then later on I spent time with her in her apartment and she was showing me all her old photos of her and Marty, her husband. I could just see at that moment just how much deep, deep love there was in that relationship," Jones said.

The actress said Ginsburg was very involved from the beginning of the project, giving "meticulous notes" to ensure that the production accurately portrayed the law. It helped that her nephew, Daniel Stiepleman, wrote the screenplay. She also paid close attention to how her relationship with her husband was presented.

"I think that's what's so special about their relationship is that it shows how men and women can work together and actually we all rise together and just how important that is. …We would watch early videos, home videos of them and them on their honeymoon and you could just see there's such joy in their eyes when they're looking at each other. Even recently, I came across another picture and it just – so much of the film is a celebration, as you say, of that love and that relationship," Jones said.

"So she was working constantly against the status quo and what's fascinating about her is how she harnesses this anger and this frustration that she felt and she turned it into something very positive and then eventually managed to completely change the system and change the laws to make the world fairer for all of us."