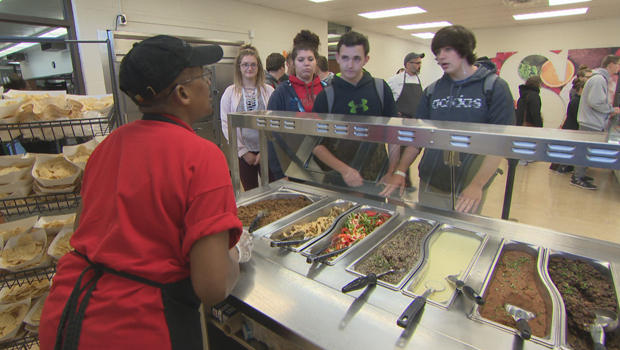 Thanksgiving is just one day out of every year. FEEDING THE NEED millions of hungry kids feel every school day is the goal of some big-hearted adults and special programs from coast-to-coast. Our Cover Story is reported by Lee Cowan:

In "America's Breadbasket," corn and wheat stretch on into the horizon. But not far from the Midwest's ample harvest live kids who go hungry almost each and every day.

Take Connersville, Indiana, about 60 miles east of Indianapolis. Nearly a quarter of the children in the county are at, or below, the poverty line. More than 60% of them participate in either free- or reduced-price lunch programs.

And those who serve those meals, like Louisa Smithson, say for some kids this may be all they eat. "This gives them a little bit of hope," Smithson said. "If we can offer them some hop, yeah!"

Schools have always been the front line in the battle against childhood hunger. It started with the National School Lunch Act, signed by President Truman in 1946, which gave federal money to states to fund school lunches.

Today more than 30 million kids benefit. And yet, by some estimates at least one in six still doesn't know where the next meal is coming from.

"School lunch is no longer this Brady Bunch convenience; it is a soup kitchen," said Jennifer Ramo, of the New Mexico anti-poverty group Appleseed.

"It is a place where kids who haven't eaten at night or haven't eaten that weekend, go to get basic nutrition so they can function.

"I think we just have no idea how big the problem is and how many children are suffering. And the best thing to do is just must make sure they're fed."

Back in Indiana that's just what they're trying to do.

"We have children who have food insecurity who come into our doors every day, and we don't always know. A lot of people are proud, [and] they don't want to ask for help."

To make certain no one is missed, every school starts every day offering every child a free breakfast, regardless of family income.

Students eat in the classroom, not in the cafeteria, so as not to take away from instruction time.

At the high school, they offer what's called a "Second Chance Breakfast," to help teens who usually get hungry later in the morning.

"I would like to say that we lead the way here in Fayette County, but I'm partial," laughed Rachel O'Brien, the person in charge of it all. She's with Chartwells, a food service company that not only cooks and serves the food, but also keeps track of the maze of federal programs that pay for it all.

And they're not leaving any money on the table. "No, we look for everything," O'Brien said, "so, we look to make sure we can give our students the best."

They're not alone.  According to the Department of Agriculture, over 20,000 schools have expanded their free food offerings, including some of the biggest districts: New York City, Chicago and Detroit.

The health benefits are obvious, but there is a psychological one, too; free food for each student means the poor and the hungry aren't singled out, as some have been in the past.

It's a stigma that's come to be known as lunch shaming, and the headlines have been full of incidents of late.

Kids unable to pay their meal debt have sometimes been denied food, or had their hot meals thrown away in front them, replaced with a cold lunch in a paper sack.

The School Nutrition Association says about three-quarters of the nation's school districts are owed money by families that haven't paid for meals.

In response, some parents have started Go Fund Me pages, including one father in Seattle who's trying to raise over half a million dollars to pay off lunch debts that parents owe all across Washington State.

It's not a new issue: Michael Padilla faced it when he went to school 35 years ago. Growing up in Las Lunas, N.M., he bounced around from foster home to foster home -- and lunch was often a luxury.

"I made very good friends with the lunch ladies, Mrs. Jackson and Mrs. Ortiz," he said.

"I do, I mean they're wonderful human beings. I would give them a giant hug today if I could. I mean they made sure that I ate lunch!"

He could eat, they said, but only if he worked off the bill. "I was required to mop the floors and clean the tables, and serve food," Padilla said.

"To pay off your lunch debt?"

"Yeah, I mean, it was just a way for the school to be able to look the other way because I couldn't afford my lunch."

Padilla is now a New Mexico state senator, and this year -- working with Appleseed's Jennifer Ramo -- he sponsored the first anti-lunch shaming law to pass in the country, called the Hunger-Free Students' Bill of Rights.

"We thought we were solving a problem here in New Mexico," Padilla said. "And as it turns out, 32 other states have reached out to me to introduce this legislation in their states."

He touted the legislation during his campaign for New Mexico Lieutenant Governor, although his candidacy is now mired in harassment allegations, which he denies.

The law was the model for a federal lunch shaming bill now pending before Congress. There wouldn't have to be one of those, of course, if everyone ate for free.

And back in Connersville, Indiana, there's one more meal about to be served: the after-school supper program. Elementary school kids get a hot dinner … and a movie while they eat.

At the high school, it's more of a grab-and-go situation. No one is turned away. No questions asked. And with that, the hope is no child goes home hungry.

Cowan said, "You really don't have to do this, certainly."

"Because our kids are our most valuable resource. And they're worth it."