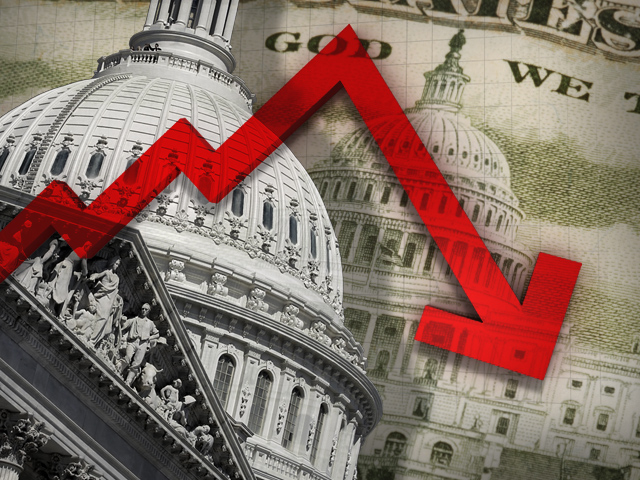 (MoneyWatch) Lawmakers gearing up for what is shaping up as another bitter partisan clash over the nation's borrowing limit later this year must reckon with a new fiscal reality: The federal deficit is shrinking fast.

A Congressional Budget Office study released today forecasts that the annual U.S. budget gap -- the difference between what the government collects in revenue every year and what it spends -- will fall this year to $642 billion. That's $200 billion less than the non-partisan forecasting arm of Congress was predicting only three months ago and down sharply from the deficit levels that swelled as the economy contracted following the housing crash.

The CBO attributed the budgetary progress to rising personal and corporate income taxes, along with Fannie Mae (FNMA) and Freddie Mac (FMCC) -- the housing agencies seized by the government during the financial crisis -- repaying part of their bailout loans from taxpayers. Tax receipts are surging largely because the payroll taxes employees pay to fund Social  Security rose in January and because rates rose on the richest Americans.

"The plunge is due in part to fiscal restraint, with outlays cut and tax rates raised," wrote Jim O'Sullivan, chief U.S. economist with High Frequency Economics, in a research note. "However, even allowing for those measures, the deficit is declining more rapidly than expected, mainly because of stronger-than-expected tax receipts."

Federal revenues are now expected to rise 15 percent in 2013, to $105 billion, about 4 percentage points higher than CBO's earlier forecast. Government outlays this year are projected to be $98 billion less than previously forecast and $522 billion lower over the next 10 years.

For the years from 2014 through 2023, CBO's deficit forecast is $618 billion less than it what it estimated in February. The office attributed the decline to lower projected spending for Social Security, Medicare and Medicaid, and interest on the public debt.

Not that the country's long-term fiscal picture is cloudless. In 2007, the federal debt remains well above 70 percent of GDP, compared with 36 at the end of 2007, the CBO noted. Absent much stronger economic growth, such debt will eventually take a toll.

"Such high and rising debt later in the coming decade would have serious negative consequences: When interest rates return to higher (more typical) levels, federal spending on interest payments would increase substantially," CBO said in the report. "Moreover, because federal borrowing reduces national saving, over time the capital stock would be smaller and total wages would be lower than they would be if the debt was reduced."

Still, the plunging budget gap reduces the urgency for Congress to slash federal spending. U.S. Treasury Secretary Jack Lew said last week that the government will reach its borrowing limit no sooner than Labor Day, longer than many experts had predicted.

The CBO said the latest fiscal data pushes the deadline for raising the debt ceiling back into October or November.

In fact, however, the continuing push to cut spending has slowed economic growth. Economists expect the sequester, the massive government spending cuts that took effect in March after Congress failed to reach a fiscal deal, to reduce economic growth this year by upwards of 1.5 percent.

This Kansas town told Tyson to get lost