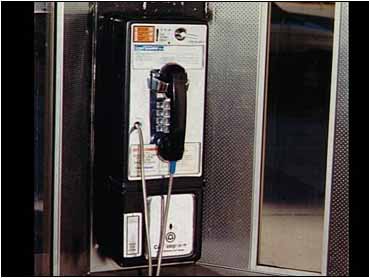 They say Nicolaso Kantartzis netted $4million in the scheme over six years.

Here's how they say it worked.

Kantartzis allegedly programmed dozens of pay phones to make phantom calls over and over again to toll-free numbers belonging to companies and the government. Such calls are free to legitimate users - but someone still has to pay for the cost of using the telecommunications hardware that carries them. Thus Kantartzis was owed a fee each time his phones rang the numbers, even if no one was on the other end of the line.

Kantartzis, 62, is charged with wire fraud, which could carry a prison term of up to 20 years and a $250,000 fine. Court documents suggest a plea deal is in the works.

Prosecutors say in court documents that Kantartzis has owned a pay-phone company since 1995 and controlled at least 165 phones in Washington and nearby Maryland. Starting in January 2005, he used a computer at his home in Bethesda to program the phones to place calls to toll-free numbers for government agencies, companies including Dell and multiple airlines, the documents say.

Pay phone operators are allowed to collect 49.4 cents for each toll-free call placed from their equipment. But in Kantartzis' case, prosecutors say the calls were not being made by real people.

The documents don't say how Kantartzis was caught, but a spokeswoman for the U.S. Attorney's Office, Vickie LeDuc, said that an investigation by the General Services Administration and the FBI led to the charges. Kantartzis declined to comment when reached by telephone on Monday - ironically enough.