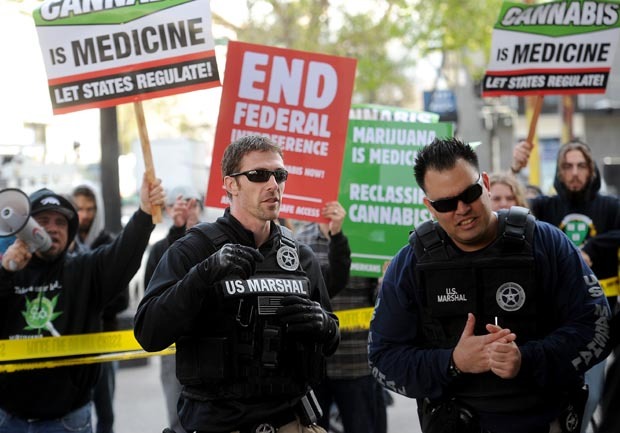 The doors to Oaksterdam University in downtown Oakland were cordoned off by yellow tape and blocked by U.S. marshals. Agents from the U.S. Drug Enforcement Administration carted trash bags of unknown materials out of the school to a waiting van.

Arlette Lee, an IRS spokeswoman, told reporters that agents were serving a federal search warrant but said she could not otherwise comment on the purpose of the raid.

"What we are doing here today is under seal," Lee said.

Marijuana Nation: The war over weed

About a dozen protesters upset over the raid gathered out front of the multistory building adorned with a large mural that makes the school one of the neighborhood's most visible landmarks. Some of them smoked marijuana openly.

The demonstrators held signs demanding an end to federal crackdowns on medical marijuana.

Ryan Hooper, 26, of Oakland, wearing an Oaksterdam hat and sweatshirt, said he had finished taking courses at the school in February.

"This is not in the best interest of the city," Hooper said. "If they close the dispensaries, all of this stuff is going to go back underground."

Oaksterdam University was founded by Richard Lee, the main backer of the California ballot measure defeated in 2010 that would have legalized marijuana in the state for recreational use. The neighborhood has also been home to several medical marijuana dispensaries, including one founded by Lee.

Enrollment has decreased at Oaksterdam, where 15,000 students have studied cannabis cultivation and related careers since 2007, the Sacramento Bee reports.

Lee did not immediately return a message seeking comment.

The city of Oakland has long allowed four medical marijuana dispensaries to legally operate under city ordinances and recently awarded permits that would allow four more to open.

At the same time, federal prosecutors across California have been working for months to shut down dispensaries by threatening to seize landlords' property if they did not evict marijuana retailers.