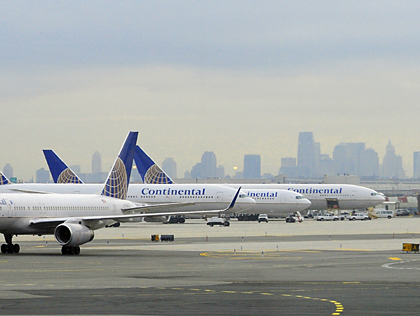 Federal officials are offering a reward in the case of a laser beamed at a commercial aircraft approaching Baltimore-Washington International Thurgood Marshall Airport.

The FBI posted a $5,000 reward Monday for information leading to the arrest of the person who beamed the laser into the cockpit of the Southwest Airlines flight from Milwaukee, with more than 130 people on board, as it passed over Millersville around 6:45 p.m. on Feb. 20.

The FBI reward comes in the wake of a report released by FAA in January documenting the record number incidents involving lasers pointed at airplanes in 2010. Congress is also considering legislation to make aiming the laser pointers at aircraft a federal crime.

Special Agent Rich Wolf from the FBI Baltimore Field Office confirmed that this is the first time a reward has been offered by the FBI in connection with one of these cases and says it is due to the injuries of the pilots.

Wolf says that while authorities have been able to "geo-locate" the approximate location of the source of the laser given the location of the aircraft, there are "no leads" in the case as of yet, reports CBS News producer Carter Yang. He says that the FBI of course hopes that the award will give an incentive to anyone who has information to report it.

The Maryland Transportation Authority Police says the incident is outside of its jurisdiction and, contrary to at least one report, it is not investigating the incident nor did it play a role in offering the reward.

The aircraft was apparently targeted on final approach for landing at an altitude of 2,000 feet. According to the FBI, "An unknown person(s) on the ground, illuminated the cockpit of the aircraft with a laser. Although the aircraft landed safely, the pilot and first officer suffered injuries to their eyes and were subsequently taken to a local hospital for treatment. This incident had the potential to cause catastrophic loss of life to the passengers, crew and individuals on the ground."

The FBI, Maryland Transportation Authority Police requests that anyone with information related to this incident to contact the FBI at 410-265-8080.