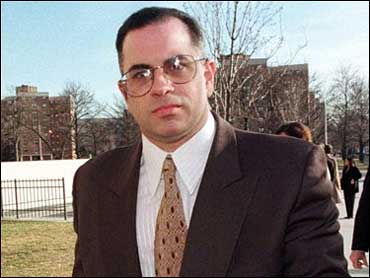 Federal prosecutors charged the son of the late Gambino boss John Gotti with multiple crimes including attempting to kill Curtis Sliwa, the outspoken founder of the Guardian Angels crime-fighting group, in 1992.

John A. Gotti, also known as "Junior," is scheduled to be released from prison in September after serving a 1999 sentence for racketeering. In the federal indictment unsealed Thursday, he was charged along with three other alleged members or associates of the Gambino organized crime family.

If convicted, the 40-year-old Gotti could face 130 years in prison.

It was not immediately clear what attack on Sliwa the indictment referred to. In April 1992, police said he was attacked by three bat-wielding young men, leaving him with a broken hand and an injured scalp. Two months later, he was shot twice while in a cab, and was hospitalized for internal injuries and leg wounds.

Sliwa, in a phone interview Thursday, blamed both incidents on the Gottis, citing his criticism of the elder Gotti. "Now the true culprit is going to have to face me in court, and I can't wait to stare at him from the witness stand," Sliwa said. "He had his thugs on two separate occasions attack me for speaking out against his father and his degenerate crime family."

Prosecutors were to release details about the charges later Thursday at a news conference in Manhattan.

Gotti's attorney, Richard Rehbock, said he had no information about the new charges.

Gotti filed a lawsuit in May claiming the federal Bureau of Prisons rejected his bid to move from prison to a halfway house because of bias against his family name. Gotti said in court papers that he was being kept in prison in part because of his "father's notoriety with the criminal justice system."

The elder Gotti, known as the "Teflon Don," was convicted of murder and racketeering in 1992 and sentenced to life in prison. He died of throat cancer in a prison hospital in 2002.

Sliwa founded the Guardian Angels in 1979, gaining renown and aggravating officialdom with the group's citizen arrests on subway trains and flair for self-promotion. Sliwa, who is also a personality on WABC radio in New York, acknowledged years ago that he had manufactured some of his most dramatic early exploits.