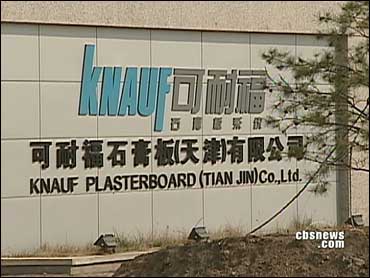 Thousands of U.S. homes tainted by Chinese drywall should be gutted, according to new guidelines released Friday by the Consumer Product Safety Commission.

"We want families to tear it all out and rebuild the interior of their homes, and they need to start this to get their lives started all over again," said Inez Tenenbaum, chairwoman of the federal agency charged with making sure consumer products are safe.

The CBS News investigative unit first reported last year about the thousands of Americans forced out of their homes by defective, rotting drywall. But the investigative unit also found that there maybe be problems with American-made drywall.

About 3,000 homeowners, mostly in Florida, Virginia, Mississippi, Alabama and Louisiana, have reported problems with the Chinese-made drywall, which was imported in large quantities during the housing boom and after a string of Gulf Coast hurricanes.

The drywall has been linked to corrosion of wiring, air conditioning units, computers, doorknobs and jewelry, along with possible health effects. Tenenbaum said some samples of the Chinese-made product emit 100 times as much hydrogen sulfide as drywall made elsewhere.

The agency continues to investigate possible health effects, but preliminary studies have found a possible link between throat, nose and lung irritation and high levels of hydrogen sulfide gas emitted from the wallboard, coupled with formaldehyde, which is commonly found in new houses.

U.S. Sen. Bill Nelson, D-Fla., said now the question is who pays to gut the homes.

"The way I see it, homeowners didn't cause this. The manufacturers in China did," Nelson said. "That's why we've got to go after the Chinese government now."

Southern members of Congress have sought to make it easier to sue Chinese manufacturers and to get the Federal Emergency Management Agency to help homeowners pay for costs not covered by insurance. They also say the U.S. needs to pressure the Chinese government, which allegedly ran some of the companies that made defective drywall.

About 2,100 homeowners have filed suit in federal court in New Orleans against Chinese manufacturers and U.S. companies that sold the drywall. U.S. District Judge Eldon Fallon is expected to rule soon in a pivotal case against the Knauf Plasterboard Tianjin Co., the only Chinese company that has responded to U.S. suits.

They are "continuing to live in their homes with Chinese drywall, patiently waiting for this thing to be resolved so they can move on with their lives," Chaikin said. "We're not waiting for the government to move quicker than we are in the courts."

In some cases, homebuilders have paid to gut and rewire homes. In others, homeowners who can afford it have paid for the work themselves.

On Friday, Knauf Plasterboard agreed that high hydrogen sulfide levels appeared to be the main concern, but it noted the commission's studies were preliminary and may not reflect conditions inside a home. The company said its studies have shown that drywall should be removed, but that plumbing and wiring do not need to go.

He also said Congress should give homeowners grants to cover the cost of home gutting.

Joyce Dowdy said she suffers from nose bleeds and her husband has a persistent cough. They blame the drywall.

They're borrowing money to do the gutting, which means that instead of a mortgage-free retirement they will be paying monthly bills cover the costs of repair.

"It's costing us as much as we paid for the house," Joyce Dowdy said. "But we can't just walk away ... Our house is worth nothing at the moment."

But Randy Noel, past president of the Louisiana Home Builders Association, said the Chinese drywall problem has been exaggerated. He called the new guidelines "overkill."

"It's a black soot on top of the copper, brass and silver," he said. "You wipe the stuff off and it looks as good as new."