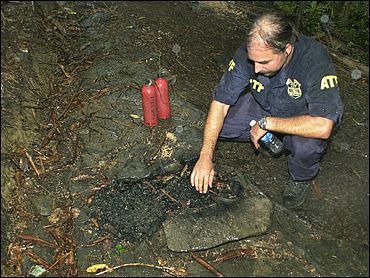 High on a mountainside, 700 feet above the nearest Forest Service road and a half-mile away, serial bomber suspect Eric Rudolph may have found a near-perfect place to hide.

CBS News Correspondent Jim Krasula reports FBI agents have been searching what they call a carefully planned campsite on a steep slope in the mountainous Nantahala National Forest not far from where Eric Rudolph was captured after five years on the run. Investigators claim the site includes a fire pit, a kind of patio of carefully-laid, interlocking slate stones, and evidence of a system to keep food suspended and away from animals.

Investigators have found and removed nails from tree trunks. Police want to know if the nails were the same as those used in several of the bombings with which Rudolph has been charged.

Investigators believe Rudolph — who pleaded innocent Tuesday in a deadly 1998 abortion clinic bombing — spent much of his five years as a fugitive at the campsite.

Rudolph, who stands accused of four separate bombings, including the blast at the 1996 Summer Olympics in Atlanta, will stand trial first in Birmingham, where he allegedly bombed the clinic, killing an off-duty police officer, reports CBS News Correspondent Mark Strassmann.

The federal government is moving to try him first in Birmingham because the evidence against him is strongest in that case. Rudolph will likely face the death penalty if convicted.

Rudolph entered his not guilty plea Tuesday before federal Magistrate Judge Michael Putnam in the bombing of New Woman All Women Health Care on Jan. 29, 1998.

The 36-year-old former soldier and survivalist is also accused in the 1996 Olympic park bombing in Atlanta, where a woman was killed and more than 100 were injured, and a pair of 1997 bombings in Atlanta at a lesbian bar and a building that housed an abortion clinic.

"There's been a public perception painted of Eric Rudolph that's far from accurate," said his attorney, Richard Jaffe, after the arraignment.

"It's going to take some time ... to sort out the facts from the speculation and from the hearsay and from the public image that's been painted," he added.

Federal prosecutors in Birmingham gave no indication whether they would seek the death penalty. When the judge asked Rudolph whether he understood the possible penalties, he replied: "I do, your honor."

"He's not going anywhere. And I truly honestly believe that we have the right man, and justice is going to be done," said Felicia Sanderson, widow of slain police officer Sande Sanderson. "I don't know how a human being could commit the acts that took my husband's life."

At the campsite, FBI agent Victor O'Korn said U.S. Forest Service agents who first examined it concluded Rudolph had not been there in months. Long-cold ashes remained in a fire pit.

Rudolph's stores of dried food at the campsite raised a question for investigators: Where did Rudolph get all the supplies, and how did he get them up the mountain?

Some authorities suspect he had help, particularly since he appeared healthy and had short hair, fairly clean clothes and jogging shoes when he was arrested in Murphy, N.C., early Saturday behind a grocery store where he was believed to be looking for food.