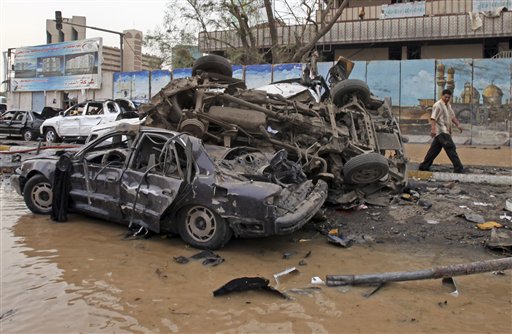 A U.S. charity and four people involved with it were indicted Wednesday on charges they illegally sent millions of dollars to Iraq, the Justice Department announced.

The four were charged in Syracuse, N.Y., with transferring as much as $2.7 million to Iraq in violation of government bans on money transfers to Iraq. They also set up a group, Help the Needy, which allegedly sought contributions. The money was deposited in central New York banks and then was sent to Iraq through the Jordan Islamic Bank in Amman, the indictment said.

Arrested were Rafil Dhafir of Fayetteville, N.Y., an oncologist; Ayman Jarwan of Syracuse, N.Y., the executive director of Help the Needy; and Osameh Al Wahaidy of Fayetteville, N.Y., a Muslim religious leader at the state prison in Auburn, N.Y., and a math teacher at the State University College at Oswego. The fourth person indicted, Maher Zagha, is living in Amman and is a former college student in Utica and Syracuse, N.Y.

The indictment grew out of a three-year investigation, the government said.

"Those who covertly seek to channel money into Iraq under the guise of charitable work will be caught and prosecuted," said Attorney General John Ashcroft.

Separately, a University of Idaho graduate student was indicted for failing to disclose on his visa application his relationship with an organization that operates Web sites praising suicide bombings.

Sami Omar Al-Hussayen, a citizen of Saudi Arabia, was arrested Wednesday in Moscow, Idaho, the government said. He was taken into custody while search warrants were being executed, reports CBS News Correspondent Stephanie Lambidakis.

He is charged with supporting the Michigan-based Islamic Assembly of North America, both by supplying money from overseas sources and by providing computer expertise. He is charged with failing to disclose his relationship with the group, which, if revealed, would have resulted in the government rejecting his visa application, the indictment said.

Web sites operated by the Islamic Assembly praise suicide bombings and tout the use of airplanes as terror weapons, the government said.

According to the government, one article posted on a site read, "The mujahid (warrior) must kill himself if he knows that this will lead to killing a great number of the enemies. In the new era, this can be accomplished with the modern means of bombing or bringing down an airplane on an important location that will cause the enemy great losses."