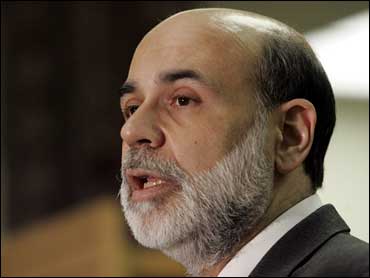 Federal Reserve Chairman Ben Bernanke said Thursday that he did not believe the growing number of mortgage defaults would seriously harm the economy.

Facing criticism from members of Congress about lax regulation, Bernanke also promised that the Fed would do everything possible to crack down on abuses that have put millions of homeowners in jeopardy of defaulting on their mortgages.

"We at the Federal Reserve will do all that we can to prevent fraud and abusive lending and to ensure that lenders employ sound underwriting practices and make effective disclosures to consumers," Bernanke said in remarks prepared for a financial conference in Chicago.

However, Bernanke in his remarks did not detail any specific tightening of regulations, saying only that the Fed would hold hearings in coming weeks on the matter.

Bernanke said that while it was likely that there would be further increases in mortgage delinquencies and foreclosures this year and in 2008, he did not believe this problem would be enough to derail the overall economy.

"We believe the effect of the troubles in the subprime sector on the broader housing market will be limited and we do not expect significant spillovers from the subprime market to the rest of the economy or to the financial system," Bernanke said.

In answering questions, Bernanke said he believed the financial system would be able to "absorb the losses from this subprime mortgage problem" without difficulty.

Bernanke, who served as President Bush's chief economic adviser before taking over the Fed post in February 2006, said regulators needed to be sure that any rules they imposed did not stifle the market for legitimate loans.

"We must be careful not to inadvertently suppress responsible lending or eliminate refinancing opportunities for subprime borrowers," he said in his remarks, copies of which were distributed in Washington.

Sen. Charles Schumer, D-N.Y., said it was good news that Bernanke was suggesting possible new rules that could be issued this summer to crack down on abusive practices. But Schumer said help was needed sooner for homeowners facing foreclosures.

"We must take action today to stem the tide of foreclosures sweeping through our neighborhoods," he said in a statement. "I hope Chairman Bernanke is right when he says that a slumping housing market will not affect the broader economy, but I would not bet the house on it."

Bernanke's comments to a banking conference sponsored by the Federal Reserve Bank of Chicago marked his most extensive review of the troubles in the subprime market since the Fed and other banking regulators came under criticism from members of Congress.

Banks and other lenders loosened their standards for making riskier mortgages during the five-year housing boom.

The problems in subprime mortgages — higher-priced home loans for people with weaker credit histories — have roiled financial markets in recent months and raised concerns about possible spillover effects to the larger economy.

But in his speech, Bernanke said that the "vast majority of mortgages, including even subprime mortgages, continue to perform well."

He said that past gains in home prices have left most homeowners with significant amounts of equity in their houses and the growth in jobs and incomes should allow most households to keep their financial obligations in a manageable range.