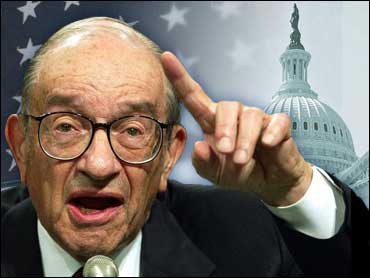 He noted that inflation has risen as well, but he repeated the belief that much of the increase in prices this year could be blamed on transitory factors such as a jump in oil prices.

As long as price pressures ease in coming months and don't threaten to become embedded in wages, Greenspan said the Fed feels it can continue to raise interest rates "at a pace that is likely to be measured."

But he cautioned that if inflation pressures do worsen, the Fed is prepared to act decisively to keep prices from getting out of control.

The Fed raised interest rates for the first time in four years on June 30 by quarter-point, pushing its benchmark federal funds rate, the interest on overnight bank loans, from a 46-year low of 1 percent up to 1 percent.

The Fed raised interest rates for the first time in four years on June 30, pushing its benchmark fedeeral funds rate, the interest on overnight bank loans, up by a quarter-point from a 46-year low of 1 percent up to 1.25 percent.

Most economists believe that increase will be followed by further quarter-point hikes at the Fed's next meeting on Aug. 10 and following meetings this year and into 2005.

But Greenspan devoted a portion of his testimony to preparing financial markets for the possibility that the Fed could be forced to raise rates more rapidly if inflation worsens.

"We cannot be certain that this benign environment will persist and that there are not more deep-seated forces emerging as a consequence of prolonged monetary accomodation," Greenspan said.

Consumers and businesses have been enjoying a period of the lowest interest rates in nearly a half-century as the Fed battled the adverse impacts of the 2000 stock market collapse, a recession, the 2001 terrorist attacks and a series of corporate accounting scandals.

Greenspan said that the extended period of low rates had allowed consumers to cut their monthly mortgage payments by refinancing and had allowed businesses to consolidate their debt burdens as well, leaving them in better position to face higher rates.

And the Fed chief said the economy would probably be able to handle the adjustment even if the Fed has to move rates up more rapidly. But he cautioned that such a scenario would bring "considerably more uncertainty and hence risk" to the economy.

"As always, considerable uncertainties remain about the pace of the expansion and the path of inflation," Greenspan told the panel. "Some of those uncertainties, especially ones associated with potential terrorism both here and abroad, are difficult to quantify."

Greenspan said so far rising terrorist risks had not translated into higher perceptions of risk in financial markets outside of the energy area.

In his appearance before the Senate panel, Greenspan delivered the Fed's updated econonmic outlook for 2004 showing that the central bank has slightly raised its expectations for inflation while trimming a bit its forecast for growth this year.

The Fed predicted that the economy will grow between 4.5 percent and 4.75 percent this year as measured from the fourth quarter of last year. That forecast is down slightly from the Fed's February estimate of growth of 4.5 percent to 5 percent.

The Fed raised its inflation outlook for this year to 1.75 percent to 2 percent this year, up from its February forecast of a 1 percent to 1.25 percent range in an inflation gauge tied to the gross domestic product that removes food and energy.

The Fed left its outlook for unemployment unchanged at 5.25 percent to 5.5 percent by the end of this year. The jobless rate currently is 5.6 percent.