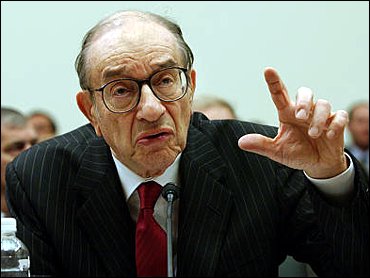 Federal Reserve Chairman Alan Greenspan said Thursday that "employment will begin to increase more quickly before long," and that erecting protective trade barriers was not the answer to the nation's current worries about the loss of jobs to foreign competition.

Wading into the hot-button political issues of job losses and Social Security, Greenspan told the House Education and Workforce Committee that erecting protectionist barriers was not the answer to foreign competition and that Congress would at some point have to address the problem of the pending retirement of 77 million baby boomers. He repeated his warning that Congress will have to trim future Social Security benefits.

Greenspan, in response to a question from Democratic presidential candidate Rep. Dennis Kucinich, D-Ohio, said that the government cannot afford to meet all the promises in Social Security and Medicare that have been made to future retirees.

"We do not have enough in real resources to meet the promises that have already been made. We will not be able to fully meet the benefits to the next generation, the baby boomers that are retiring," Greenspan said.

"We have to construct a pattern that the benefits we do promise will be delivered rather than have these people retire in very large numbers and find out that they were betrayed by government," Greenspan said.

Greenspan's comments about the need to trim retirement benefits provoked a firestorm of criticism when he made them last month, with critics charging that Greenspan was urging benefit cuts at the same time that he was urging that President Bush's tax cuts be made permanent.

Greenspan did say on Thursday that he believed some tax increases would be needed to bolster Social Security because the funding gap was so large that it could not be closed entirely by trimming benefits. But he said Congress should start with benefit reductions before moving to tax increases because higher taxes would act as a drag on economic growth.

Kucinich challenged Greenspan to defend his recommendation that the retirement age, which is scheduled to rise gradually to 67, be raised further to reflect longer lifespans. Kucinich said that would be unfair because 50 percent of current Social Security beneficiaries chose early retirement at 62, even though it meant reduced benefits. Kucinich said many Americans simply can't work longer because of health problems.

Greenspan said the issue was that government did not have the resources to meet all the retirement benefits currently pledged under Social Security and Medicare and that choices would have to be made and "all the choices regrettably are negative."

On the economy, Greenspan said the nation had reason to be more optimistic that job growth will rebound in coming months.

"As our economy exhibits increasing signals of recovery, jobs loss continues to diminish," he told the House Education and Workforce Committee. "In all likelihood, employment will begin to increase more quickly before long."

Since President Bush took office in January 2001, the country has lost 2.2 million jobs.

Greenspan said that the extended period of job losses has heightened fears that U.S. workers are losing out to foreign competition and spurred a number of proposals to erect protectionist trade barriers.

Greenspan did not name those who are pushing such trade barriers, but Sen. John Kerry, the expected Democratic presidential candidate, has attacked the Bush administration's free-trade policies and promised to review all trade proposals to make sure they contain protections for American workers.

Greenspan said a "new round of protectionist steps" represented "alleged cures" which he said "would make matters worse rather than better."

Instead, Greenspan said the country needed to explore avenues to make sure that all Americans had the opportunity to get a good education and then be able to return to school to improve their job skills.

Greenspan said that support for community colleges has been an area where government investment in education has paid off. He said community colleges were likely to provide critical support to boosting job skills in the future as more and more workers see the need to upgrade their skills over their careers.

Greenspan said it was understandable that Americans felt a heightened job insecurity given the loss of jobs and that even in the current recovery, job growth has been weak — reflecting the fact that companies are boosting productivity to increase output rather than rehiring laid-off workers.

But he said raising trade barriers to keep foreign goods out of the country would remove the pressure for U.S. companies to become more competitive and push America's standard of living lower.