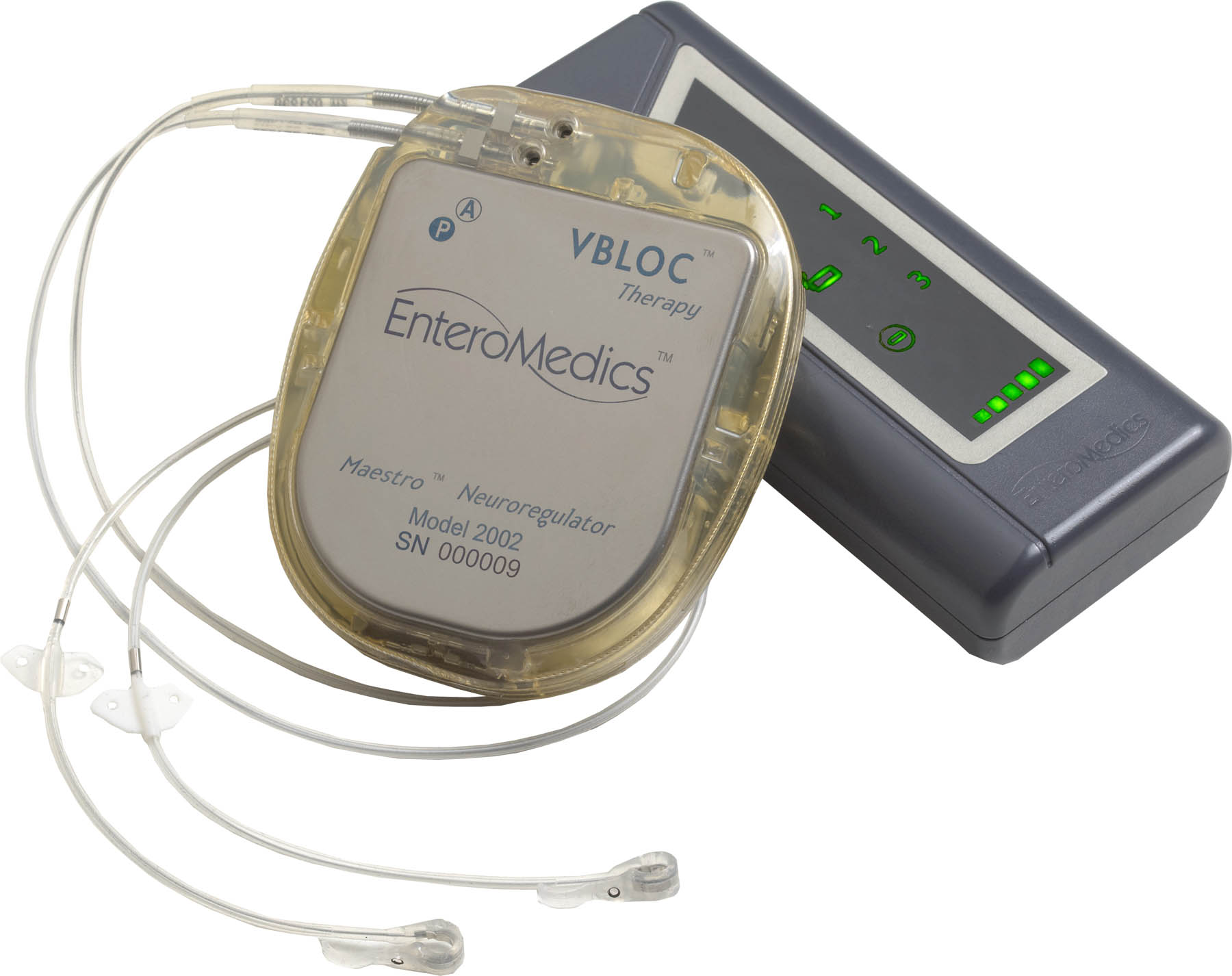 A first-of-its-kind implant that curbs the appetite by electrically stimulating stomach nerves was approved Wednesday by the U.S. Food and Drug Administration.

The implant sends electrical signals to nerves around the stomach that help control digestion. These signals block the nerves, decreasing hunger pangs and making the person feel full.

The FDA approved the device for use in people 18 and older who have a body-mass index (BMI) of 35 to 45 and at least one other obesity-related condition, such as type 2 diabetes. BMI is a ratio that determines body fat based on a person's height and weight. For example, a person who's 5 feet, 8 inches tall and weighs 230 pounds has a BMI of 35. People with a BMI of 30 or higher are considered obese, according to the U.S. Centers for Disease Control and Prevention.

People receiving a Maestro implant also must have tried and failed to lose weight with a traditional weight loss program, the FDA said.

The device is the first FDA-approved obesity device since 2007.

EnteroMedics reported that people with fake implants regained about 40 percent of the weight they had lost within six months of the trial's end, while the people with the Maestro device appeared to sustain their weight loss.

According to the CDC, more than one-third of all U.S. adults are obese, and people with obesity are at increased risk of heart disease, stroke, type 2 diabetes and certain cancers.

As part of the FDA approval, Minnesota-based EnteroMedics must conduct a five-year post-approval study that will follow at least 100 patients and collect additional safety and effectiveness data.

The clinical trial for Maestro did not meet its original goal: That people with the device lose at least 10 percent more excess weight than the control group, the FDA noted.

However, an agency advisory panel decided that statistics from the trial proved that the device could cause sustained weight loss. The panel also agreed that the benefits of the device outweighed the risks in patients who meet the set criteria.

However, based on the mixed results from the clinical trial, it's likely that many weight loss doctors will not immediately adopt the device and recommend its use, said Dr. Maria Pena, director of the Center for Weight Management at North Shore-LIJ's Syosset Hospital in Syosset, N.Y.

"Before we say we're going to put something within you that requires a surgical intervention, we always ask whether it's worth it," Pena said. "It seems like it does work in promoting weight loss, but we don't know how much. Is it worth the hassle of going through surgery? We're going to need more data and more time, because we've tried this in the past and it hasn't been very effective."

One other weight-loss expert was more positive about the promise of the new device.

"Although this system by itself is unlikely to turn the tide in the battle against the obesity pandemic, it represents a positive step in the overall approach taken towards treating obesity," said Christopher Ochner, an obesity and nutrition expert at The Mount Sinai Hospital in New York City.

"Contrary to what many still believe, obesity is largely a biologically mediated disease," he said. "Therefore, it makes sense that more biologically based interventions will be required to achieve lasting weight loss."

Ochner said the vagal nerve is known to play a key role in food intake, and "I would not be surprised to see more such treatment options become available in the next several years. How this system will fare in terms of long-term treatment effectiveness remains to be see but post-approval studies have wisely been required by the FDA."

The device appears to be largely safe, with only about 4 percent of patients suffering a health problem due to the implant, according to an FDA report on Maestro.

Serious reactions reported in the clinical study included nausea, vomiting, surgical complications, and pain at the place under the skin where the pulse generator had been implanted, the FDA said. Other adverse events included pain, heartburn, problems swallowing, belching, mild nausea and chest pain.