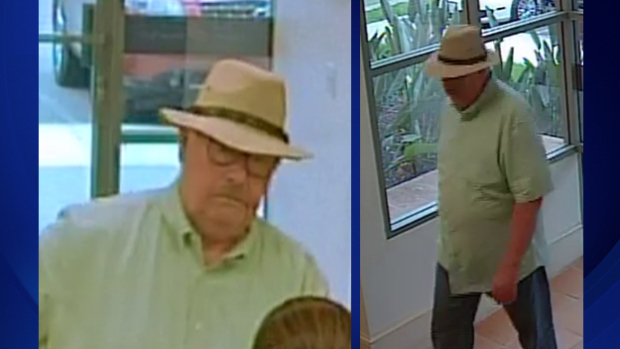 The most recent robbery happened Tuesday afternoon at First Citizens Bank in Rancho Santa Margarita. It was the second time the man has hit this bank, FBI spokeswoman Laura Eimiller told the station.

The same suspect has reportedly been linked to at least four other robberies -- in Mission Viejo, Monarch Beach, and Ladera Ranch.

The robber is described as a white male between the ages of 55 and 60; 5-foot-9 tall; and weighs between 180 and 200 pounds, according to CBS Los Angeles.

During some of the robberies, the robber shows a gun as he demands cash, reports the station, and descriptions of the suspect vary slightly. On June 11, the bandit carried a white pouch with the word "Medic" printed on it. At Tuesday's robbery, and at the one committed on July 6, he wore a straw hat.