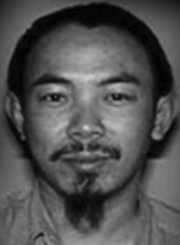 The Federal Bureau of Investigation on Wednesday confirmed that one of its "most wanted terrorists" is dead.

Zulkifli bin Hir, also known as "Marwan," was killed in a raid in the Philippines in January. David Bowdich, Assistant Director in Charge of the FBI Los Angeles Field Office, said the terror suspect's death was confirmed "after a thorough review of forensic data and information obtained from our Philippine law enforcement partners."

The FBI had offered $5 million for the arrest of bin Hir, a Malaysian who was believed to be the head of the Kumpulun Mujahidin Malaysia (KMM) terror group and a member of the al Qaeda-linked Jemaah Islamiyah in the Philippines.

He was accused of leading bomb-making training in the Philippines for the past 12 years.

A Jan. 25, 2015 police operation in the Philippines to capture bin Hir resulted in the death of 44 elite police commandos, the Associated Press reported.

"The men and women of the FBI express sincere condolences to the brave officers of the Special Action Force who lost their lives while attempting to apprehend this dangerous fugitive," Bowdich said.

This is the second "most wanted terrorist" removed from the FBI's list in a month. In March, authorities apprehended Liban Haji Mohamed, a former cab driver from Northern Virginia, wanted for trying to recruit people to join the extremist group al-Shabab.