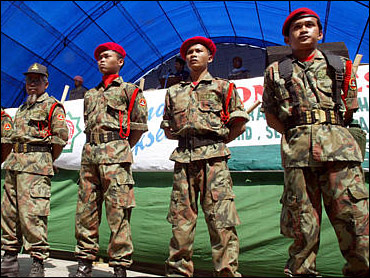 A secret government report says Muslim guerrillas in the southern Philippines have hosted terror training camps for militant groups from Indonesia and Malaysia for at least seven years -- a period when Southeast Asia was plagued by bombings that have killed hundreds of people, like the Bali nightclub attack in 2002.

The training lasted at least until 19 new members of Jemaah Islamiyah -- the al Qaeda-linked Southeast Asian terror group -- finished in January, according to a copy of the government security assessment report obtained Wednesday by The Associated Press.

The report provides insight into the depth and duration of the training of foreigners from Jemaah Islamiyah and other extremist groups at the camps, regarded as a lifeline for Osama bin Laden's al Qaeda following the destruction of its key training camps in Afghanistan.

U.S. and Australian officials have expressed deep concerns over persistent reports of such camps here, saying Jemaah Islamiyah could pass deadly skills to a new generation of militants capable of striking anywhere. A number of suspected Jemaah Islamiyah militants arrested in Southeast Asia have said they trained in the southern Philippines.

The Philippine government has acknowledged that foreign terrorists have trained in the south in the past, but officials say the camps now have been broken up, thanks in part to military training and logistical support from Washington. The military says up to two-dozen Jemaah Islamiyah members may still be in the south, but they're on the run and no longer training.

But other military officers said on condition of anonymity that training continues at the camps, where some of the training has been done by al Qaeda operatives, the report said.

The 14-page report by Philippine intelligence officials gave an overview of the country's major terror threats from four Muslim and Marxist groups, including Jemaah Islamiyah. The report was given to Philippine agencies involved in counterterrorism work.

The government has arrested suspected Indonesian and Filipino operatives for Jemaah Islamiyah in recent months, leading to the discovery of bank accounts and business fronts believed used to funnel funds intended for attacks. It also set up an anti-terror force.

Jemaah Islamiyah seeks to establish a hardline Islamic enclave in Southeast Asia's Muslim heartland - Indonesia, Malaysia and parts of Thailand and the Philippines.

It has been blamed for several lethal attacks, including the Oct. 12, 2002, bombings that killed 202 people in Bali, Indonesia. This month, the group claimed responsibility for a suicide bombing that killed nine people outside the Australian Embassy in Jakarta.

There's no direct evidence the perpetrators of those attacks trained in the Philippines, but Filipino intelligence officials say one suspected Indonesian bomb expert who acted as a trainer at one camp here -- Fathur Rohman Al-Ghozi -- may have been involved in a 2000 car bombing of the Philippine ambassador's residence in Jakarta that killed two people and wounded the diplomat.

Al-Ghozi was captured in Manila. He escaped from custody in July 2003 and was killed by police in a shootout three months later.

The covert training was reportedly hosted mostly by the Moro Islamic Liberation Front, a Muslim group that's been waging a bloody separatist insurrection and has rural strongholds across the impoverished south.

Despite rebel denials, there's plenty of evidence of an operational relationship between the guerrillas and Jemaah Islamiyah, analysts say, and Filipino rebels could exploit concerns over such links as a bargaining chip in the talks.

"We're giving them the opportunity to see the actual situation," Kabalu said. "They have the capability to detect such terror training, but they will find nothing."

The Jemaah Islamiyah training base was set up near three other camps used separately to train militants from Indonesia, it said.

After Camp Abubakar fell during a July 2000 military offensive, Jemaah Islamiyah instructors and trainees set up a new camp, Muaskar Jabal Quba, on densely forested Mount Cararao on the boundary of Maguindanao and Lanao del Sur provinces, the report said.

It did not say how many Jemaah Islamiyah recruits have trained in Mindanao, but said one "cadetship" program trained 51 people in all, with the latest group of 19 finishing in January. They included an Indonesian identified as Zulkipli, who became head of the group's Philippine cell. He was arrested in Malaysia last year.