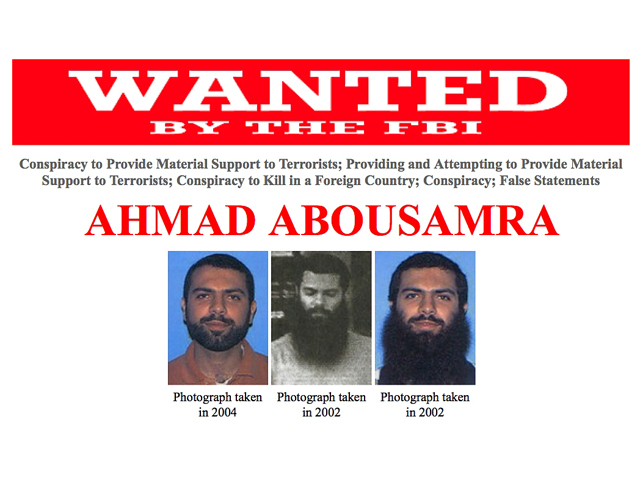 BOSTON A $50,000 reward is being offered for information leading to the arrest of a Massachusetts man who is wanted on terrorism charges, the FBI said Wednesday.

The FBI said it is seeking the public's help in locating Ahmad Abousamra, a U.S. citizen from Mansfield who authorities believe may be living in Aleppo, Syria, with at least one child, a daughter, and extended family. He uses several aliases.

Abousamra, now 31, fled the United States in 2006, shortly after being interviewed by the FBI.

The FBI says Abousamra is an associate of Tarek Mehanna, a Sudbury man convicted on four terrorism charges and sentenced this year to 17-and-a-half years in prison.

Abousamra was indicted in 2009 after taking multiple trips to Pakistan and Yemen, where he allegedly attempted to obtain military training for the purpose of killing American soldiers overseas. The FBI said he also traveled to Iraq in the hope of joining forces fighting against the United States, but said the exact nature of his activities there is unknown.

Prosecutors said during Mehanna's trial that Mehanna and Abousamra failed to find a terrorist training camp.

"We think that the indictment very clearly characterizes the very serious threat that he poses, and that's why we are initiating our world media campaign today to highlight our fugitive search for him," DesLauriers told The Associated Press in a telephone interview.

DesLauriers said the FBI has had an active fugitive investigation since Abousamra was indicted in 2009. He would not say what prompted the FBI to launch the publicity campaign now.

Special Agent Heidi Williams, a member of the FBI's Joint Terrorism Task Force, said both Abousamra and Mehanna were "self-radicalized" and used the Internet to educate themselves.

"They came to it independently, but once they found each other, they encouraged each other's beliefs," Williams said in a statement.

She said both men were inspired by the Sept. 11, 2001, terrorist attacks. "They celebrated it," she said.

The FBI said it will use traditional media and social media like Facebook and Twitter, as well as its website to make photos, an audio clip of Abousamra's voice and wanted posters in English, French and Arabic available to the public.

Abousamra was born in France, is of Syrian descent and has dual citizenship in the United States and Syria. He speaks, reads and writes fluently in English and Arabic, and has a college degree related to computer technology.