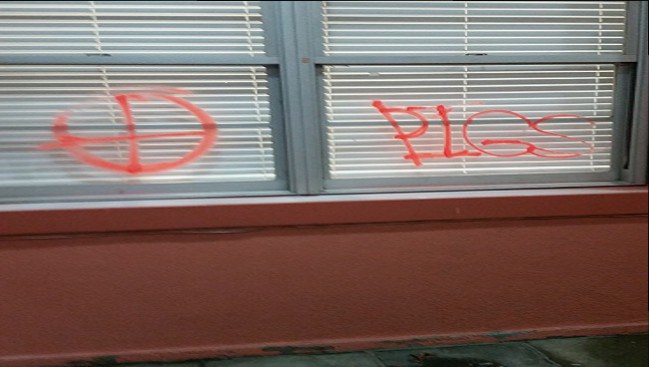 WEST WARWICK, R.I. -- The FBI is investigating the source of offensive graffiti at the Islamic School of Rhode Island in West Warwick.

The agency's Boston division announced Monday it has begun a civil rights investigation into the vandalism Saturday night.

School officials say the entrance was tagged with orange graffiti that read "Now this is a hate crime," ''pigs" and offensive references to Muhammad.

Hilmy Bakri, president of the school's board of trustees, said the school has never before been the subject of vandalism or any serious threats. It opened in 2004.

CBS affiliate WPRI reports that the school was vandalized one day after a vigil was held for Muslim students killed in North Carolina.

"This shameful incident is completely at odds with our state's founding principles, and I hope the perpetrators will soon be brought to justice. To the families and staff who were affected, please know that Rhode Island stands with you and supports you."

Meanwhile, in Bothell, Washington, authorities were investigating anti-Muslim graffiti spray painted on a Hindu temple and a junior high school.

Two swastikas were found spray painted on buildings at Skyview Junior High School, according to Bothell police. CBS affiliate KIRO reported that there was graffiti that read "Muslims get out" near a swastika on the building.

Bothell police and the Snohomish County sheriff's office are investigating.

The Northshore School District released a statement condemning the vandalism and saying the district values diversity.