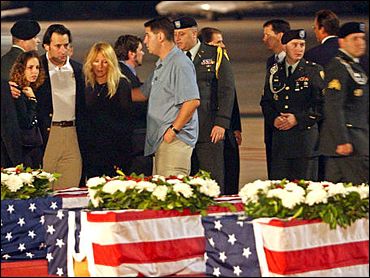 An FBI team met Friday with Palestinian security officials as part of a joint investigation into a deadly bombing of a U.S. convoy. A day earlier, seven suspects from a rogue Palestinian militant group were arrested in Gaza — a move dismissed by Israeli sources as meaningless.

Separately, Israeli Prime Minister Ariel Sharon appeared to back down from a recent threat to expel Palestinian leader Yasser Arafat, telling an Israeli daily that such a move would be bad for Israel.

"Our calculations have been for years that expelling him would not be good for Israel," Sharon said in an interview published Friday in the Jerusalem Post.

Travel of U.S. officials to Gaza has been suspended indefinitely and the U.S. Embassy in Tel Aviv is reviewing all security arrangements, include travel routes in the Palestinian areas, said a senior U.S. official, speaking on condition of anonymity.

"I would expect that we would be consulting on the proper way of reacting to this outrage," he said.

The convoy attacked Wednesday was on the main north-south road in Gaza, the route usually taken by diplomats moving between Israel and Gaza City.

The U.S. official said there were no specific warnings about an impending attack.

FBI investigators met for several hours Friday with Palestinian police commanders at an Israeli checkpoint near the border with the Gaza Strip.

The Palestinian Authority has arrested seven members of the Popular Resistance Committees, which consists largely of former members of the security services and disgruntled followers of Arafat's Fatah movement.

The U.S. official said American investigators are not focusing on any particular group. "We don't have a particular address we're going after," he told reporters.

The official said he believed the attack on the convoy was a result of growing anti-American resentment in the Palestinian areas, in part because of U.S. policy in the region.

"They were a credit to their country and to our community. We are proud of them, and we mourn their loss," Kurtzer said in a eulogy. Afterward, the coffins, draped with American flags, were put aboard a plane.

Palestinian police were greeted Thursday by gunfire when they came to search seven homes in the Jabliya refugee camp to arrest the suspects in the attack. Later in the day, officers tried to detain another suspect in Jebaliya, but aborted the mission when they came under machine-gun fire.

The Popular Resistance Committees were formed at the end of 2000, three months after the outbreak of Israeli-Palestinian fighting. They consist mainly of Fatah breakaways and ex-security men. Other factions, including Hamas and Islamic Jihad, are also represented.

The group believes that force is the only way to end Israeli occupation of the West Bank and Gaza Strip. Israeli officials said the group has ties to the Lebanese guerrilla group Hezbollah.

The Popular Resistance Committees have destroyed three Israeli tanks with massive remote-controlled bombs in the past two years — the same technique used in Wednesday's attack on the American convoy.

"I am 100 percent sure that we will be able in the coming days to reach who planned and carried out this attack," he told Israel Radio.

But Israeli security officials told Army Radio the arrests were an imaginary measure designed to placate the U.S.

In an apparent nod to the United States, Arafat placed all nine Palestinian security units in the Gaza Strip under a single commander, Maj. Gen. Abdel Razek Majaidie. The United States has demanded reforms in the Palestinian Authority — especially in the security forces — and a crackdown on militant groups.

The attack could lead to a further U.S. disengagement from mediating the conflict and could deter the international community from sending large numbers of monitors — a long-standing Palestinian request.

In his comments published Friday, Sharon appeared to backtrack on a Sept. 11 Israeli Cabinet decision that decided "in principle" to remove the Palestinian leader. The decision came two days after a pair of Palestinian suicide attacks that killed 15 Israelis.

Both Israel and the United States have attempted to sideline Arafat, calling him an obstacle to peace, and have tried to encourage the emergence of an alternative Palestinian leadership.

Sharon told the Jerusalem Post that Israel was reluctant to try to expel Arafat because "the likelihood of expelling him without harming him is low."

Israeli forces on Thursday continued a large operation in the Rafah refugee camp on the Gaza-Egypt border, searching for tunnels allegedly used by Palestinians to smuggle weapons.

A member of the Palestinian security forces and a man identified by local people as a gunman were killed, and 13 people were wounded in sporadic exchanges of fire, hospital officials said.

Israel also announced the arrest of a member of the Palestinian Coast Guard who allegedly smuggled weapons into Gaza from Egypt.

In a separate development, Israel said Friday that it had lifted three roadblocks in the Gaza Strip, letting Palestinians move freely through most of the area. The roadblocks were erected on Oct. 5 after a suicide bombing in the Israeli city of Haifa.