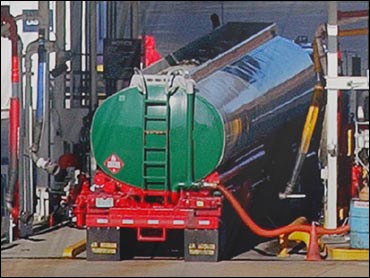 The FBI is now saying that a warning released this week about terrorists eyeing fuel trucks as possible weapons was based on uncorroborated intelligence information.

The warning went out to law enforcement agencies in Los Angeles, New York and Chicago.

In L.A., police have stepped up their truck inspection program, randomly checking tankers and other large vehicles on a random basis.

One security expert in New York, Robert Stang, says even though the information hasn't been verified, there's no reason not to sound a warning. He says it helps law enforcement "stay on their toes" and keep them aware of any possible terrorist activity. Stang says he's sure al Qaeda will strike again in the U.S., so any stepped-up enforcement might be a deterrent.

Though intelligence bulletins usually describe how reliable the information is, this one carried no such statement.

The bulletin warned police that terrorists could use fuel tankers in assaults on the three cities. The warning has not been substantiated, according to two law enforcement officials who spoke on condition of anonymity because of the sensitivity of the situation.

"If you're driving a tanker truck in one of those three cities today, there's a probability you might get pulled over and have police check your license and registration," said CBS News Consultant Randy Larsen, director of the Institute for Homeland Security.

The intelligence originated from FBI headquarters in Washington. It was not immediately clear why the bulletin was sent without details on its reliability.

The warning was issued Aug. 9, said Larsen, and is considered uncorroborated because it only has one source.

"I think it's credible enough that they felt that they had to tell the officials in these three cities," Larsen said.

Eimiller noted that FBI officials often notify police of possible threats, regardless of how accurate the information might be.

"Information at all levels is shared with law enforcement," she said.

"This is about as specific a warning as they'll ever have," Larsen told CBS Radio News. "It identifies three cities and they said the weapon the terrorists would use."

The Transportation Security Administration has considered fingerprinting all truckers who drive hazardous materials, but Larsen doesn't think the idea is practical.

"There are 2.7 million people with permits to carry hazardous cargo. It will cost about $200 each to fingerprint them and check them against known terrorists. That's a quarter billion dollars," Larsen told Early Show co-anchor Harry Smith. "Here's who we're fingerprinting: people who carry paint, fingernail polish remover and, here's my favorite, Listerine. I don't think it's the best way to be spending our limited resources."