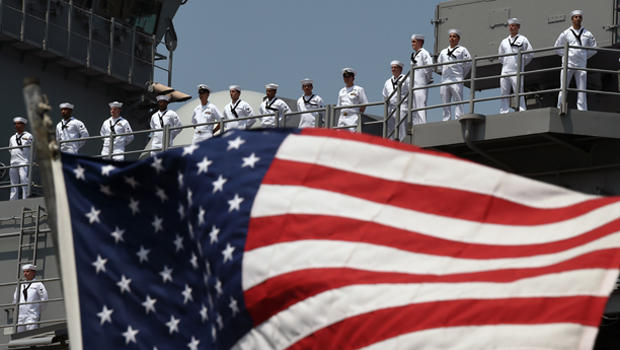 SAN DIEGO -- A retired Navy admiral is among 9 military officers who have been indicted in a burgeoning bribery scandal involving a Malaysian defense contractor nicknamed “Fat Leonard.”

The indictment unsealed Tuesday in federal court in San Diego alleged that retired Adm. Bruce Loveless and the other officers accepted the services of prostitutes, lavish meals and fancy trips from Leonard Francis in exchange for helping his company, Glenn Defense Marine Asia.

It was the latest indictment in the three-year-old case that has charged more than 20 former or current Navy officials so far and marks one of the Navy’s worst corruption scandals in history.

Prosecutors say Francis, whose nickname comes from his wide girth, bilked the Navy out of nearly $35 million -- largely by overcharging for his company’s services supplying Navy ships in the Pacific with food, water, fuel and other necessities.

Francis obtained classified information by buying off Navy officers who helped him beat out the competition or steer ships to ports in the Pacific where he could charge fake tariffs and fees, prosecutors said.

The indictment describes a party in Manila in 2007 hosted by Francis and attended by an officer named in the indictment that allegedly included “historical memorabilia related to General Douglas MacArthur” being used “in sexual acts.”

During another stop in Manila in 2008, the indictment alleges officers attended “a raging multi-day party, with a rotating carousel of prostitutes in attendance, during which the conspirators drank all of the Dom Perignon available” at their hotel.

The defendants were arrested Tuesday in California, Texas, Pennsylvania, Florida, Colorado and Virginia. Loveless was arrested at his home in Coronado across the bay from San Diego. None of the defendants or their defense attorneys could be immediately reached for comment.

“This is a fleecing and betrayal of the United States Navy in epic proportions, and it was allegedly carried out by the Navy’s highest-ranking officers,” said Acting U.S. Attorney Alana W. Robinson.

She added that “the alleged conduct amounts to a staggering degree of corruption by the most prominent leaders of the Seventh Fleet -- the largest fleet in the U.S. Navy -- actively worked together as a team to trade secrets for sex, serving the interests of a greedy foreign defense contractor, and not those of their own country.”

Among those charged so far was another admiral who was sentenced in June and is believed to be the first active-duty Naval flag officer charged in federal court.

Francis has pleaded guilty to fraud and is awaiting sentencing.