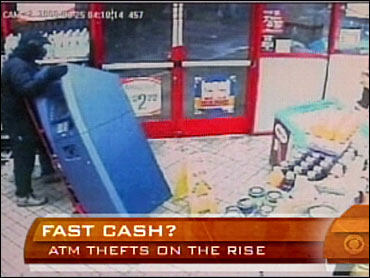 Times are tough, and for some people, ATM's are just too tempting, with all that money just sitting in a box. As CBS News correspondent Hari Sreenivasan explains, ATM thefts are up nationwide.

Around the country getting fast cash is getting dangerous: in Dallas, six thieves targeted the most valuable cash prize in a convenience store: the ATM.

"From the time they backed it in the front door, threw the chain around the ATM, pulled the ATM in the back of the truck, they were gone in 45 seconds on average," explains Walt Roberts, who runs a security firm that protects ATMs.

Roberts says these thieves usually steal their getaway trucks and vans beforehand; and they're striking more often. "I think the economy has a play in it. If you're getting' $6, 8, 10,000 a haul, maybe you're doin' two a night, ya know for five people, that's pretty good money," he explains.

Within minutes thieves pry the money out with sledgehammers and crowbars and dump the ATMs wherever they can. It is a national problem.

In Miami, Fla. thieves rammed a bulldozer stolen from a nearby construction site through the bank's concrete barriers to get at the ATM.

In a Wisconsin warehouse, a thief used a forklift to load a stolen ATM into the back of a station wagon. He was later caught and the ATM was still in the back, covered with a blanket.

In Los Angeles, a criminal walked in with a dolly, snipped a few wires, grabbed an unbolted ATM, and calmly wheeled it out with thousands of dollars.

Dallas has had almost 80 ATM thefts so far, almost as many as the entire number of ATM thefts last year. The police now pursue vehicles, dispatch helicopters and send multiple officers to the scene but know they can't do it alone.

"There can be tracking devices put in ATMs where if the ATM is stolen they can be tracked," says Dallas Police Chief David Kunkle.

Police hope that dyes that ruin the money inside a stolen ATM immediately and GPS devices that help find an ATM once its moved will keep these convenience store less convenient.