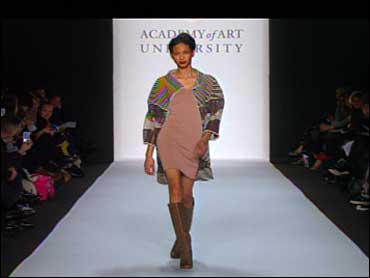 February's Mercedes Benz Fashion Week at Bryant Park was the chance of a lifetime for five aspiring designers to debut their first professional attempts at collections, and they weren't about to let a recession ruin the party.

The select few who presented on opening day of the Fall 2009 event were seniors hand picked from the School of Fashion at the Academy of Art University in San Francisco. They'd worked tirelessly for months to design a line of clothing promising enough to impress their professor, and potential throngs of shopaholic customers. If all went well, each of the five students hoped Friday, February 13th was their lucky night; that Fashion Week would help launch a long and lucrative career, tanking economy or not.

"Hard times are probably the perfect time for a young, motivated, innovative person to get into the industry where obviously some new ways of thinking and new ways of doing things are going to have to emerge," said Emily Melville, an AAU student specializing in creating original prints and silhouettes. She looked at the growing number of frugal shoppers as an opportunity rather than an obstacle.

"I think there's probably going to be a shift away from mass-marketed, disposable clothing to more timeless pieces, things that are going to last for a long time. People are going to look for quality over quantity," Melville added, "which is what I want to give them."

It's a smart attitude to have, perhaps one that's taught to AAU students. The university's Director of Fashion, Simon Ungless, said it's one of the worst economies he's seen in years, which also means it's a chance for the right designer to shine. AAU student Qianya Martin hopes that's her, proudly showing off her ornately hand sewn pieces including a coat she estimated to be worth $5,000 to $6,000.

"We'll find ways to rebuild what's been lost," said Martin, of poor sales and expenses that can't be recouped. But she remained optimistic, faithful in the power of a centuries-old industry and it's ability to survive yet another recession.

"Fashion is wide open," said Martin, "It can be whatever you want it to be."
By Meg Oliver and Anlynn Truong