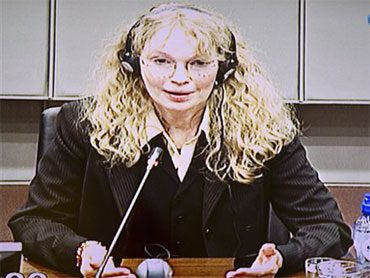 The prosecution called Farrow and Campbell's former agent Carole White to testify about a gift of uncut diamonds the former Liberian president allegedly gave the model at a September 1997 party hosted by Nelson Mandela.

Campbell told the court on Thursday she was given several small stones by unknown men during the night, but she hadn't known they were diamonds nor who had sent them.

If Farrow's account is true, it would dent Taylor's denials of any involvement with the trade in illicit diamonds.

The prosecution claims Taylor traded guns to rebels in neighboring Sierra Leone in exchange for uncut diamonds - known as "blood diamonds" for their role in financing conflicts - during the country's 1992-2002 civil war, which left more than 100,000 dead.

Farrow testified that Campbell told other guests over breakfast she had received a diamond from Charles Taylor.

"She said that in the night she had been awakened, some men were knocking at the door, and they had been sent by Charles Taylor, and they had given her a huge diamond," Farrow said, recounting her memory of what Campbell said at the time.

Farrow said Campbell was quite excited by what had happened and said she would give the gift to charity.

The former head of Nelson Mandela's children's charity said Friday that he was given three rough-cut diamonds by Campbell during her visit to South Africa, backing-up that part of Campbell's testimony a day earlier at the war crimes trial.

Taylor denies all 11 charges he faces at the Special Tribunal for Sierra Leone, including murder, rape, sexual enslavement and recruiting child soldiers.

Prosecutors allege he armed and commanded Sierra Leone rebels who murdered and mutilated thousands of civilians.

Farrow had been due to testify after Carole White on Monday, but she was called out of order, enraging Taylor defense lawyer Courtenay Griffiths.

"I am seriously angry about this," the usually reserved Griffiths said, his voice raised. He said he had been notified Farrow would testify first minutes before she was to take the stand.

"We have prepared and planned our strategy based on their notification that their first witness would be Carole White," he said.

He accused prosecutors of "playing fast and loose."

In a compromise, Judge Julia Sebutinde decided prosecutors could call Farrow and White in succession, and that the defense could cross examine both after.