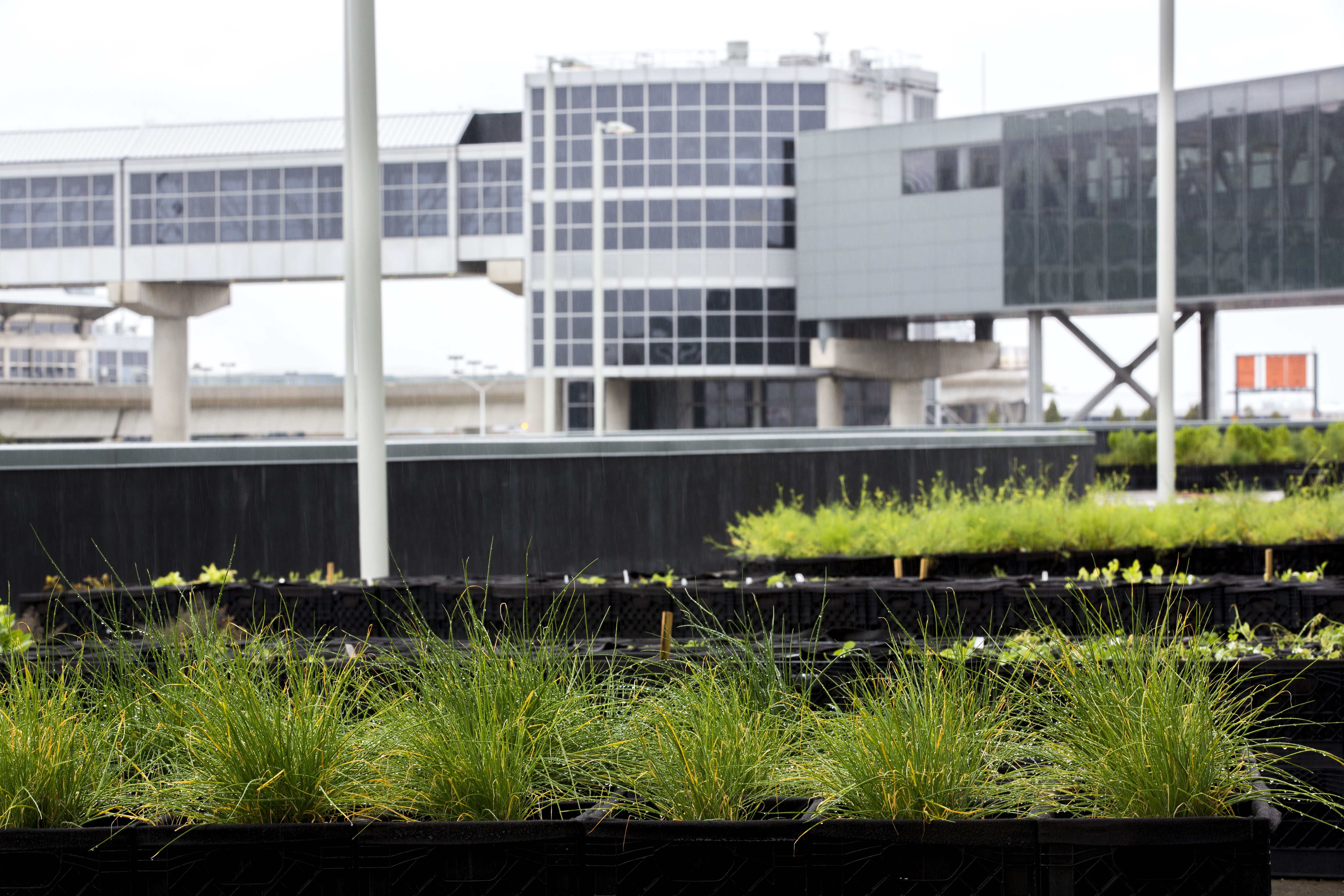 NEW YORK - JetBlue Airways (JBLU) is trying to bring a little bit of country to the city -- opening its own "farm" at New York's John F. Kennedy International Airport.

The 24,000 square-foot space -- less than half the size of a football field -- outside JFK's Terminal 5 is meant to educate travelers more than actually feed them. Although eventually JetBlue would like to serve items grown there in terminal restaurants and even make some blue potato Terra Chips that are served on flights.

One day, if the airport allows it, there might even be animals, such as bees and butterflies.

The goal is to try and teach people about farming and to improve the appearance of the terminal's exterior.

"We know people like green space. It's what they have at home. Why not put that at an airport if that's what they love and want?" says Sophia Leonora Mendelsohn, the New York-based airline's head of sustainability. "Your flying experience starts on the ground."

Building a farm at an airport is not simple: It took JetBlue three years to get approval.

Airports are concerned about anything that would attract wildlife, especially birds. That means no growing tomatoes, corn, berries, seeds or sunflowers in its new garden. (The airline originally wanted to grow wheat and use it to make its own JetBlue JFK beer.)

So instead, JetBlue is focusing on potatoes, chives, basil, carrots and other plants deemed safe.

The airline expects to grow 1,000 potato plants, yielding more than 1,000 pounds of spuds every four to six months, along with an additional 1,100 plants such as mint, arugula, beets, garlic, onions and spinach.

The project is in partnership with GrowNYC, a non-profit environmental group that focuses on improving New York City block by block. Students will be brought in from local schools to learn about gardening.

Some of the herbs and produce will be used by restaurants in JetBlue's terminal, others will be donated to local food banks.

All of the plants are grown in plastic milk crates that are bolted together and then tied to hooks in the cement floor. The structure is designed to withstand 160 mph hurricane-force winds, another requirement of the airport's operator, The Port Authority of New York and New Jersey.

For its first few months, the farm will be closed to the public. Then in the spring, pending approval from various regulators, JetBlue hopes to have educational programs for local students. Eventually, the airline envisions allowing some of its fliers to sign up in advance for visits.

One of JetBlue's sponsors in the project is Hain Celestial, which makes Terra Chips and other natural food brands including Arrowhead Mills, Earth's Best, Health Valley and Walnut Acres.

Jared Simon, senior director of marketing for the company, says right now they are growing Adirondack blue potatoes at JFK to raise awareness of farming.

"Most people have probably not been to a potato farm," Simon said. "It's really about the education. There's such a desire from consumers to connect what they are eating with where it is from."

Eventually, the potatoes might be used to make the blue chips served on JetBlue flights, but not until the company figures out if the crop has the right amount of starch, sugar and moisture.

Terra Blues can be found on all JetBlue flights and have been the official snack of JetBlue Airways Corp. since the airline launched in February 2000. Last year, the airline handed out more than 5.7 million one-ounce bags of the chips.

It takes one to three potatoes to make each bag. There's no way this tiny airport farm will ever supply enough potatoes. Maybe, if lucky, it will yield enough for less than 1 percent of demand. The majority will continue to come from a farm in Van Buren, Maine.