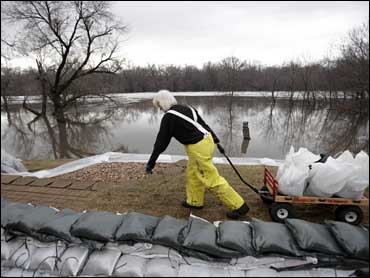 The National Weather Service lowered its crest forecast for Wahpeton and its cross-river neighbor, Breckenridge, Minn., downward to 18 feet by Wednesday morning, well below the tops of their dikes.

Meteorologist Jim Kaiser called it "definitely good news" but said it's too early to say whether the Red's projected crest in Fargo, 30 miles to the north, would also be lowered.

The weather service revised its Wahpeton prediction because it got new data from river gauges to replace a computer-modeled prediction, Kaiser said.

The Red was expected to crest at Fargo between 39 and 41 feet by Saturday morning, though an updated forecast was due from the weather service later Tuesday. By about midday Tuesday, the river had reached 30.5 feet at Fargo, up about five feet since Monday morning.

An emergency dike to protect downtown Fargo was being raised to 42 feet, but the expected crest would still threaten several neighborhoods and hundreds of homes in lower areas. The Red's record high at Fargo is 39.6 feet, set during devastating 1997 flooding.

About 50 miles northeast of Fargo, authorities in the small northern Minnesota town of Crookston called for the voluntary evacuation of about 200 people from low-lying areas after an ice jam caused a sudden rise on the Red Lake River. The river was near the top of city dikes and rising, though the ice jam had broken and officials hoped the river would recede.

Hundreds of volunteers were at work in Fargo on another day of placing sandbags, with a goal of filling nearly 2 million.

The weather service forecast a 50 percent chance of rain in Fargo on Tuesday, with snow possible Tuesday night into Wednesday.

North Dakota had mobilized 660 National Guard members and expected to have 800 working by day's end. Minnesota sent more than 300.

"It's nice to have them deal with our sand, not the Iraq sand," said Rep. Earl Pomeroy, D-N.D.

Along with sandbags, Fargo was deploying a portable wall system that shielded troops in Iraq and Afghanistan from bullets. The system is made up of 3- and 4-foot-high interlocking containers that are filled with sand. It took workers just half an hour Monday to set up about 1,000 feet of the containers.

The system was designed for erosion control, but quickly became popular with the military, said Stephanie Victory, a spokeswoman for manufacturer Hesco Bastion. Its first meaningful test for flood protection was last summer in Iowa, she said.

The city of Fargo was operating three large machines capable of producing 15,000 sandbags an hour. Sand was also being piled on the floor of the Fargodome for people to shovel into bags the old-fashioned way.

While eastern North Dakota residents battled the Red River, residents of ranching and farming country to the west fought the sudden rise of other streams swollen by melting snow and rain.

Because of the flooding on the Red River and elsewhere in North Dakota, Amtrak said Tuesday it is detouring its Empire Builder around three communities for at least a week. Spokesman Marc Magliari said Devils Lake, Grand Forks and Rugby will not have Amtrak service until further notice.

Magliari says it likely will be several weeks before the tracks will be in shape to resume service to the three communities.

It took a National Guard helicopter to rescue Bernie and Jenny Martin when a creek around their farm near Carson rose faster than expected.

"We were on an island. We were totally surrounded by water," Bernie Martin said by phone from a friend's home. Guard members used the helicopter because they were worried a boat would hit floating ice chunks or strong current.

At Linton, south of Bismarck, a rising creek forced the evacuation of about 75 homes, and about 10 people were rescued by boat.