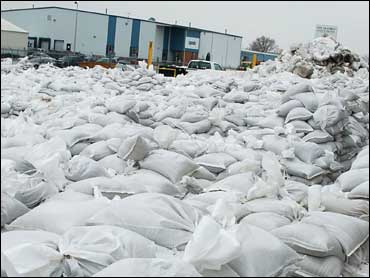 The race to fill 1.5 million sandbags to fight what could be record flooding has shifted into high gear with the addition of 225 National Guard soldiers and more cutting-edge equipment.

Volunteers were being bused in to Fargo's "Sandbag Central," a city utility building the size of a football field normally used for housing garbage trucks. About 130,000 sandbags were produced on Friday, and the operation went into 24-hour mode on Saturday.

"The first three hours this morning we produced 40,000 bags, which is ahead of yesterday's pace," said Bruce Grubb, Fargo's enterprise director. "So I'm extremely happy with that."

The city on Saturday also was closing the First Avenue North bridge over the Red River for dike construction.

The latest projections from the National Weather Service say the Red River is expected to crest between 37 feet and 40 feet sometime between March 28 and April 1. Officials are nervous about a storm that's expected to drop an inch or two of rain in the Red River Valley beginning on Sunday.

A 40-foot crest is 22 feet above flood stage and about a half-foot higher than the historic 1997 spring flood that left several Fargo residents scrambling to save their homes.

"If we go to 40 feet, we're going to be tested," Fargo Mayor Dennis Walaker said Saturday after touring sandbagging operations with Gov. John Hoeven and other state and local officials.

Federal authorities said they are increasingly worried about the expected flooding along the Red River Valley in the coming days, and have launched an unmanned aircraft to survey the region.

John Stanton, director of national air security operations for the U.S. Customs and Border Protection agency, told The Associated Press that the Predator drone will map a 90-mile long swath from just south of Fargo to the Canadian border, along the river. He said the request for an expanded patrol area for the drone was submitted to the Federal Aviation Administration three days ago, and approved on Friday.

The radar mapping was to begin Saturday for a pre-flooding assessment, and will continue until the river has crested and begins to recede.

"This is looking like a terrible year, it may exceed the 1997 flood," said Stanton, pointing to the wide expanse of ice and snow expected to melt in the coming days.

The drone was flown to the state in December, and has been regularly used to patrol the northern U.S. border, in flights that originate at the Grand Forks Air Force Base.

In addition to the storm, officials said it would be difficult to predict overland flooding.

"I've talked to folks who have lived in areas for a long time who won't even predict that," said Dave Rogness, Cass County emergency manager. "They say you never know exactly where it's going to come from, or when, or how much."

"It didn't look as threatening as we've been hearing," he said. "Cautious optimism is the comment I would make right now."

Officials in Grand Forks planned to bring another so-called "spider sandbag" machine to Fargo. The city of Fargo recently bought two of the machines, which can produce about 5,000 sandbags an hour.

"It looks a little 'Star War'-ish in here," Grubb said, looking at the multiple legs that flow sand into bags. "But it's great."

Officials said they are hoping to produce 250,000 bags a day. The North Dakota State University football team was scheduled to join the endeavor in the next few days, Walaker said.

"We're still getting more demand for volunteers than we have volunteers," Rogness said. "This need is only going to increase over the next several days."