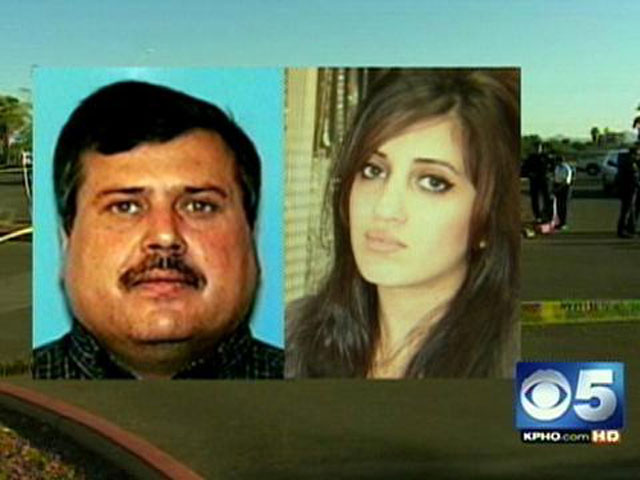 (CBS/AP) PHOENIX - Iraqi immigran Faleh Hassan Almaleki was sentenced Friday to 34 ½ years in an Arizona prison for running over and killing his 20-year-old daughter because she had become too Westernized.

Maricopa County Superior Court Judge Roland Steinle told Faleh Hassan Almaleki that forgiveness is the core of all religion, but the judge said he was struck by Almaleki's apparent lack of remorse for killing Noor Almaleki.

The case caused outrage nationwide after prosecutors deemed it an "honor killing" because Faleh Almaleki had said his daughter dishonored his family.

On Oct. 20, 2009, Noor Almaleki spotted her father when she and Amal Khalaf visited a Department of Economic Security office. When the two women left the office, Faleh Almaleki hit them with his Jeep before fleeing the country, prosecutors said.

Law enforcement soon found him in London and returned him to Phoenix.

Noor Almaleki was in a coma for two weeks before she died from her injuries. Khalaf lived and was at Friday's sentencing.

Faleh Almaleki moved his family from Iraq to a suburb of Phoenix in the mid 1990s. He wanted his daughter to adhere to Iraqi traditions, but she wanted to be a typical American girl, according to court records.

Noor Almaleki refused to enter an arranged marriage in Iraq at the age of 17 sending her father into a fit of rage, court documents state.

In 2009, she moved in with her boyfriend and his parents, Reikan and Amal Khalaf, after saying her own parents had hit her.

A document said Faleh Almaleki regularly harassed his daughter and the Khalafs, once telling Reikan Khalaf that if his daughter didn't move out of their home, "something bad was going to happen."

Complete coverage of the murder of Noor Almaleki on Crimesider