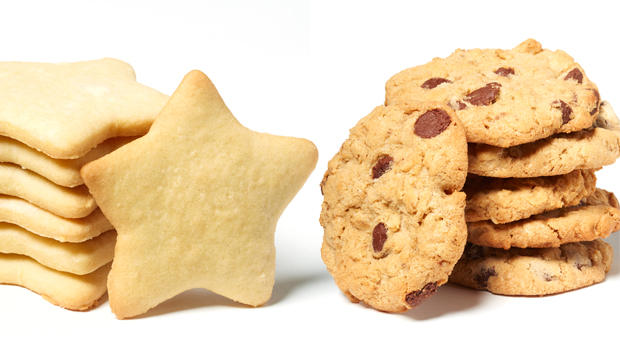 It’s time for the quadrennial Presidential Cookie Bake-off, and Faith Salie has tested the contestants:

Mrs. Donald Trump and Mr. Hillary Clinton have submitted their entries for the Presidential Cookie Bake-off -- you know, the retrograde tradition that began either with sexism or irony in 1992.

Over the past six elections, the winning cookie has predicted the winning candidate, with the exception of Cindy McCain’s exceptional Butterscotch Oatmeals, which crumbled Michelle Obama’s Shortbreads.

Now I want to bake America great again, so I did what any good voter would do: I stayed home and baked cookies with my kids. We made both recipes in a wild display of bipartisanship.

Melania Trump does not reveal the provenance of her recipe for Star Cookies -- maybe she borrowed it from Michelle Obama?

Bill frankly emasculates himself by recycling his wife’s recipe from ‘92 and renaming it the “Clinton Family’s Chocolate Chip Cookies.”

Bill’s cookie appeals to folks who appreciate color, in the form of chocolate. However, instead of good ol’ American butter, it calls for shortening!

Both First Spouse candidates have a lot of dough. Melania’s dough was sticky and high maintenance. I kept trying to picture her doing this with a manicure and her flashy rings.  And then I remembered she has a private chef.

Bill’s dough should have been easier, but I actually had to leave my house to buy Crisco, which was embarrassing.

Look, there are better ways for potential first spouses to face off. Let’s have them compete in a talent show! 42 can play the sax! Mrs. Trump can catwalk! Let’s see who “smizes” better (it’s “smiling with your eyes”). My money’s on Bill for the smize.  Melania’s more smoldery.

I know you’re dying for the results of the presidential cookie taste test. In our home, my son and husband went for the chocolate, while my daughter reached for the stars. Our guests -- two voters from Florida and one from Ukraine -- leaned toward the Clinton cookie, but with zero enthusiasm. Maybe it tasted better in the ‘90s?

So who’s the winner in this gluten free-for-all? The bottom line is … neither is a great choice.

So, hold your nose and vote!