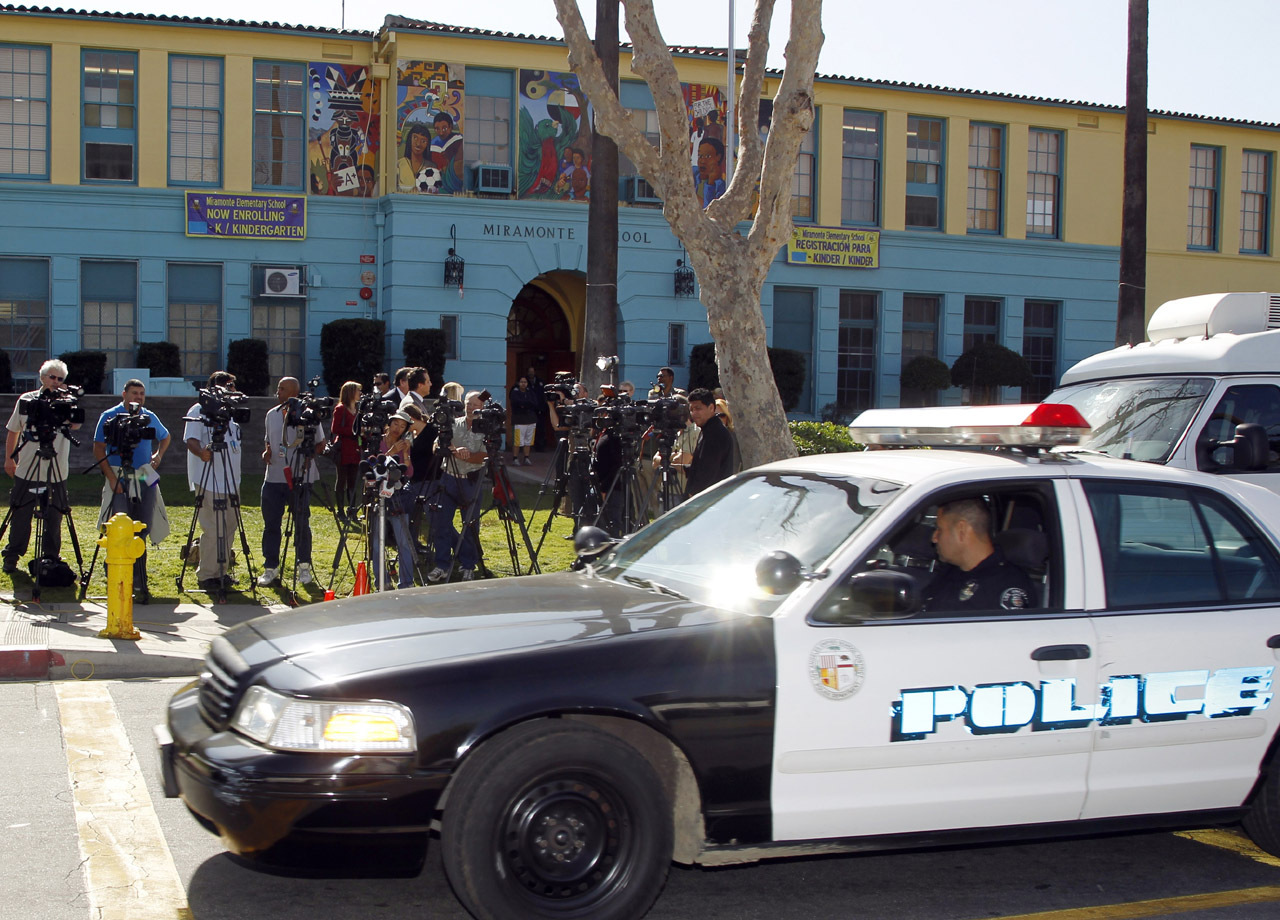 LOS ANGELES - The entire faculty at an elementary school where two teachers were arrested on suspicion of lewd conduct will be removed while the school district investigates, the Los Angeles school superintendent told parents Monday.

Superintendent John Deasy told parents and media on Monday night that the Miramonte Elementary School staffers are being replaced because a full investigation of allegations is disruptive and staffers require support to get through the scandal, too.

An entire staff has been trained to come into classrooms at Miramonte to take over teaching for the time being, and there will be a psychiatric social worker in every classroom to help students and staff cope with any issues.

School officials canceled classes at the school on Tuesday and Wednesday as a cooling-off period, said district spokesman Tom Waldman.

Deasy emphasized that all staff members being brought into the classroom went through a "very rigorous screening process."

Maria Jimenez, 51, said the parents whose children are enrolled at Miramonte are divided over the move.

"Some are in favor. Others are against it because they did this without advising us or consulting us," Jimenez said.

The move follows the arrest of two Miramonte teachers: Mark Berndt was charged last week with committing lewd acts on 23 children, while Martin Springer was arrested Friday on suspicion of fondling two girls in his classroom.

More than a quarter of the students at Miramonte were absent from school Monday while parents demanded more protection at the school, with attendance reaching just 72 percent, according to figures from the Los Angeles Unified School District.

About three dozen parents and supporters protested in front of the main doors of the school earlier Monday, some carrying a banner that read, "We the parents demand our children be protected from lewd teacher acts."

The protest was an unusual event in the poor, overwhelmingly Latino neighborhood, where many parents and students struggle with the English language.

Many people finally gathered around former state senator-turned-lawyer Martha Escutia, who lectured them in Spanish about how to organize for the media and suggested a catchy name for their fledgling movement: Mothers of Miramonte.

As night fell, about 100 angry parents marched from the elementary school to the nearby meeting with administrators.

School police watched and sheriff's deputies were on hand, but there was no violence.

The acts cited by authorities include blindfolding children and feeding them his own semen in his classroom in what children were allegedly told was a tasting game.

Berndt, 61, remains jailed on $23 million bail and could face life in prison if convicted.

Springer, 49, was arrested on suspicion of fondling two girls in his classroom. He was being held on $2 million bail.

Springer taught at Miramonte for his entire career, which started in 1986, the district said. He taught second grade.

The school board is scheduled to discuss firing him in a closed-door meeting Tuesday.

Investigators said they know of no connection between the Miramonte cases. Berndt and Springer know each other and took their classes on at least two joint field trips in the past decade, according to the Los Angeles Times.

The district set up a toll-free hotline on Monday to receive reports of suspected abuse at Miramonte, said school board President Monica Garcia in a statement.

Garcia added that the district would step up efforts to ensure students and staff realized the importance of reporting misconduct.

In the same school district, a janitor at a San Fernando Valley elementary school was arrested on suspicion of committing a lewd act with a child on a campus.

Paul Adame, 37, was taken into custody after a mother told police on Sunday that he had inappropriate contact with her child during school hours Friday at Germain Elementary School in the Chatsworth area north of Los Angeles, police Capt. Kris Pitcher said at a news conference.

The captain declined to provide details but urged anyone who might know of other possible victims to contact police.

Adame was booked and released on $100,000 bail Monday. It could not be immediately determined if he had an attorney.

There was no immediate connection between the arrest of the janitor and the cases at Miramonte, which is 15 miles away in an unincorporated county area of South Los Angeles.