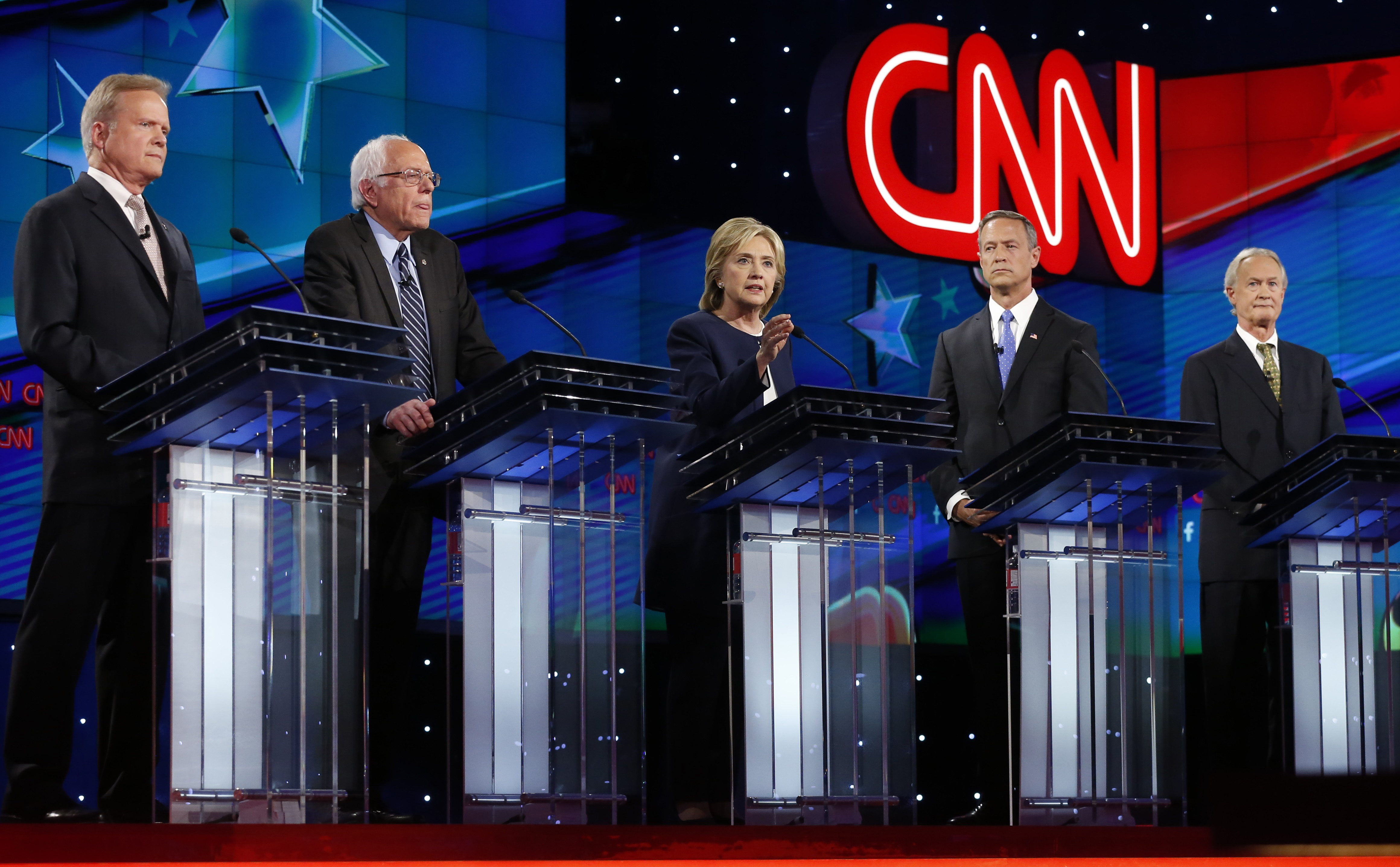 During a question about her changing political positions, debate moderator Anderson Cooper mentioned that Clinton once called the Trans-Pacific Partnership (TPP) the "good standard" for trade deals before announcing earlier this month she would oppose the deal.

"I did say, when I was secretary of state, three years ago, that I hoped it would be the gold standard. It was just finally negotiated last week, and in looking at it, it didn't meet my standards," Clinton said.

The line about the "gold standard" came from a speech Clinton made in Australia on Nov. 15, 2012.

"This TPP sets the gold standard in trade agreements to open free, transparent, fair trade, the kind of environment that has the rule of law and a level playing field. And when negotiated, this agreement will cover 40 percent of the world's total trade and build in strong protections for workers and the environment," she said.

Clinton's words then did not include "hope" that the deal with be the gold standard and rather, suggested she was certain it would be.

And, in her 2014 memoir, "Hard Choices," she also spoke favorably of the deal.

"As governor, I came in at the depths of the recession and we turned my state around. Rhode Island had the biggest drop of the unemployment rate over my four budgets of all but one state. It happens to be Nevada, where we're having this debate," Chafee said.

This claim is untrue, and what's more, Chafee has changed his story over the course of the year. On April 12, he appeared on CNN and declared, "We had the biggest drop of unemployment, the rate of unemployment, of all but four states." That statement was true.

There are indeed at least four states, including Nevada, that had larger drops in their respective unemployment rates from January 2011 through January 2015 (the period during which Chafee served as governor of Rhode Island). Rhode Island saw its unemployment rate fall from 11.2 percent to 6.5 percent -- that's a drop of 4.7 percentage points. Yet North Carolina and Florida both saw a 4.8-percentage-point drop, and California's unemployment rate dropped 5 points. As Chafee has pointed out, Nevada saw a very significant drop in unemployment during that span of time -- 6.5 points.

"I think that we have to look at the fact that we lose 90 people a day from gun violence. This has gone on too long and it's time the entire country stood up against the NRA. The majority of our country supports background checks, and even the majority of gun owners do," Clinton said.

Clinton is correct: Data from the Center for Disease Control and Prevention shows that in 2013, 33,636 died from injuries caused by a firearm -- that's about 92 people a day. But more than 21,000 of those people -- about 58 a day -- committed suicide with a firearm.

"We should not be the country that has the highest rate of childhood poverty of any major country and more wealth and income inequality than any other country," Sanders said during the debate.

Both statements are rooted in truth, although the data suggests a more complicated picture. A 2012 UNICEF report said the U.S. had the highest childhood poverty of any country other than Romania, which is not a member of the wealthy nations that make up the Organization for Economic Co-operation and Development (OECD). But UNICEF put out another report in 2014 with more updated numbers, which puts the U.S. childhood poverty rate lower than Greece, Spain, Israel and Mexico, all of which are OECD members, and Latvia, which is not.