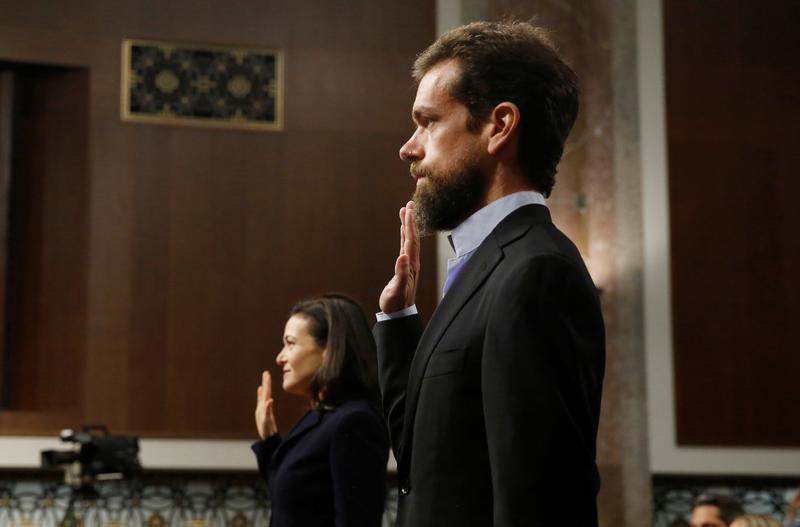 Facebook and Twitter executives defended their companies in two congressional hearings Wednesday, arguing they are aggressively trying to root out malicious foreign actors who want to do the United States harm just weeks before the midterm elections — and arguing that they don't discriminate against conservatives.

Google declined to send a top executive to a morning hearing before the Senate Intelligence Committee, so the company's absence was marked by an empty chair and glass of water in the hearing room. Both Senate Intelligence Committee Chairman Richard Burr, R-North Carolina, and Vice Chairman Mark Warner, D-Virginia, lambasted Google for failing to sent a top representative.

Burr emphasized that the platforms have significant influence in shaping the nation's conversation, and even left the possibility of further regulation open — something that might have been unthinkable for Republicans in a different environment.

"What is under attack is the idea that business as usual is good enough," Burr said in his opening statement. "The information that your platform disseminates changes minds."

Also on Wednesday, Twitter CEO Jack Dorsey faced some upset Republicans who claim his platform is biased against conservatives. Rep. Joe Barton, R-Texas, did not accept Dorsey's claims that Twitter doesn't use political ideology to make decisions and aims to make as many voices heard as possible.

"We wouldn't be having this discussion if there wasn't a general agreement that your company has discriminated against conservatives, most of whom happen to be Republicans," Barton said, after Dorsey answered a number of questions from him.

In his prepared testimony, Dorsey said Democrats in Congress didn't have more reach than Republicans, after accounting for other factors.

"Looking at the data, we analyzed tweets sent by all members of the House and Senate, and found no statistically significant difference between the number of times a tweet by a Democrat is viewed versus a Republican, even after our ranking and filtering of tweets has been applied," Dorsey said in his afternoon testimony.

At one point, a protester interrupted the hearing with shouts — and was drowned out by Rep. Billy Long, who gave an auction call.

Dorsey acknowledged that Twitter's verification system is insufficient, and does in some ways prioritize verified users' content. Twitter has been looking to overhaul its verification process in recent months.

"Our verification program right now is not where we'd like it to be and we do believe it is in serious need of a reboot, and a reworking," Dorsey said.

After the morning hearing with both Dorsey and Sandberg, the DOJ said Attorney General Jeff Sessions has convened a meeting with some state attorneys general to address fears that social media companies are "stifling the free exchange of ideas."

"We listened to today's Senate Select Committee on Intelligence hearing on Foreign Influence Operations' Use of Social Media Platforms closely," Justice Department spokesman Devin O'Malley said in a statement. "The attorney general has convened a meeting with a number of state attorneys general this month to discuss a growing concern that these companies may be hurting competition and intentionally stifling the free exchange of ideas on their platforms."

But that, according to some, is also a part of the problem. Twitter has been criticized for allowing conspiracy theorist Alex Jones to remain on the the platform, even after accusing victims of the Sandy Hook and Parkland shootings of being crisis actors. Jones, who has accused social media sites of censoring his content, showed up at the hearing Wednesday.

At one point Wednesday morning while reporters were speaking with Sen. Marco Rubio, R-Florida in a hallway outside the hearing, Jones berated Rubio for what he views as a failure to act on perceived censorship. Jones, repeatedly interrupting Rubio's comments, placed his hand on Rubio's shoulder, prompting the senator to tell Jones to stop touching him. Rubio said he would "take care" of Jones if necessary, but laughed that comment off and denied that he threatened to hurt Jones physically, according to video of the interaction.

Lawmakers made it clear that — while they appreciate the involvement of Facebook and Twitter in combatting foreign influence — it's still insufficient. Dorsey acknowledged Wednesday, to the disappointment of Sen. Susan Collins, R-Maine, that Twitter doesn't notify followers of foreign adversary accounts that they have interacted with a malicious actor.

"We simply haven't done enough so we don't have, in this particular case, we don't have enough communication going out..." Dorsey said.

Dorsey noted that Twitter has continued to identify accounts that may be linked to the same Russian Internet Research Agency  discussed in special counsel Robert Mueller's indictment of 13 Russians. Dorsey also noted Twitter has so far suspended 3,843 accounts the company believes are linked to the agency, and has seen recent activity.

In her testimony, Sandberg detailed ongoing efforts to take down material linked to the Internet Research Agency, including the removal this year of 270 Facebook pages. Still, Sandberg says the company's overall understanding of the Russian activity in 2016 is limited "because we do not have access to the information or investigative tools" that the U.S. government has.

"This is an arms race, and that means we need to be ever more vigilant," Sandberg said in her written testimony. Sandberg's mea culpa appeared to mirror that of Facebook CEO Mark Zuckerberg, whose appearance before Capitol Hill in April was widely panned by lawmakers as a glorified apology tour.

"We didn't take a broad enough view of our responsibility, and that was a big mistake, and it was my mistake, and I'm sorry," Zuckerberg told lawmakers at the time.

The morning hearing before the Senate Intelligence Committee concluded shortly after noon.

The afternoon hearing in the House Energy and Commerce Committee will feature only Dorsey in a hearing focused on bias and the platform's algorithms. Some Republicans, including President Trump, have pushed the idea ahead of the elections that Twitter is "shadow banning" some in the GOP because of the ways search results have appeared. Twitter denies that is happening. Dorsey claims Twitter's behavioral analysis "does not consider in any way" political views or ideology.