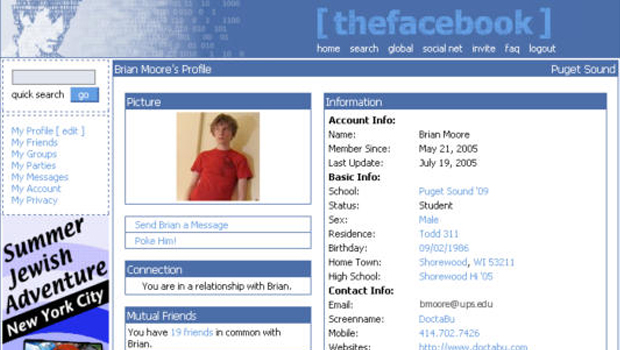 In 2004, NASA rovers Opportunity and Spirit landed on Mars, “Million Dollar Baby” won the Oscar for Best Motion Picture, and Janet Jackson had a “wardrobe malfunction” during Justin Timberlake’s performance of “Rock Your Body” at the Super Bowl. The Boston Red Sox won the World Series for the first time since 1918, breaking the famous “Curse of the Bambino.”

But something else happened in Beantown that year that would change the world.

"Everyone’s been talking a lot about a universal face book within Harvard. I think it’s kind of silly that it would take the University a couple of years to get around to it. I can do it better than they can, and I can do it in a week,” Zuckerberg told the Harvard Crimson days after thefacebook.com launched.

Zuckerberg knew he was onto something, but had no idea how big the social network would become.

"People often ask if I always knew that Facebook would become what it is today. No way," Zuckerberg wrote on Facebook Tuesday morning, in a post reflecting on Facebook's 10th anniversary.

Facebook hit its first big milestone in December 2004 when it hit 1 million users. The social network acquired its current Web address Facebook.com in 2005. It also began letting users tag their friends in photos and expanded outside of the United States.

Facebook spread like wildfire through universities across the United States and in 2006, it opened registration to anyone under the age of 13.

That year, Twitter launched and MySpace.com surpassed Google.com as the most visited website in the United States. It was also the year that Yahoo offered to purchase Facebook for a reported $1 billion. According to Wired, the deal fell through after Yahoo’s CEO at the time, Terry Semel, cut the offer from $1 billion to $800 million.

In September, Facebook launched what is perhaps the most central feature of the social network: News Feed. A feature that competitors Friendster and MySpace were lacking, News Feed provided a constant stream of Facebook friends’ activities.

The social network was faced with its first big controversy in 2007, with the discovery of its Beacon advertising platform. Beacon enabled the sharing of data from outside of Facebook with users' friends, with the purpose of targeted advertisements. A class action lawsuit was filed against Facebook in 2008 and the feature was shut down in 2009.

“I'm the first to admit that we've made a bunch of mistakes. In particular, I think that a small number of high profile mistakes, like Beacon four years ago and poor execution as we transitioned our privacy model two years ago, have often overshadowed much of the good work we've done,” Zuckerberg wrote on Facebook in 2011.

Facebook surviving the Beacon hiccup was perhaps the first sign that the social network was here to stay. Despite the controversy, Facebook sold 1.6 percent of the company to Microsoft for $240 million. And by August 2008, Facebook had reached 100 million users.

Small but enduring features added in 2009 included the Like button and was the ability for people to tag friends in status updates using the @ symbol. The feature launched a drop-down menu once the @ symbol was typed in. Typing in a persons name would populate the menu and that friend would be notified that they were mentioned in a Facebook post.

The rise of Facebook was given the Hollywood treatment in 2010, with David Fincher’s film “The Social Network.” Mark Zuckerberg had been a big name in the tech industry by then, but the film solidified him as a household name. “The Social Network” garnered eight Academy Award nominations, winning Best Motion Picture, Best Director, Best Screenplay and Best Original Score.

In 2011, Facebook launched Timeline -- a controversial redesign that turned profiles into two columns. Users complained that the layout was confusing. In 2012, the opinion site SodaHead polled Facebook users and a whopping 70 percent didn't like the redesign. Out of 1,981 votes, only 392 liked Timeline, while 1,388 said to lose it.

"We heard from you that the current timeline layout is sometimes hard to read. Starting today, all posts are on the right side of your timeline, with photos, music and other recent activity on the left," Facebook said in a March 2013 news release.

The company redesigned Timeline in 2013, going back to a single column feed and using a smaller, left column to highlight photos and recent activity.

When Facebook went public in 2012, it had just agreed to purchase photo-sharing app Instagram for $1 billion -- its biggest purchase yet. In October of that year, Facebook had another big first: 1 billion users.

In 2013, Facebook launched the Android platform Home and “graph search.”  The former was introduced with Facebook’s first phone -- the HTC First. The smartphone retailed at about $100, but failed to take off. Its carrier AT&T reportedly cancelled the phone due to poor sales. But that hasn’t slowed down the social network. Facebook reported 1.23 billion active users in December 2013.

Just ahead of its birthday, Facebook launched Paper -- a mobile news-reading app that is already getting glowing reviews. Its stock jumped 15 percent at the end of January, exceeding expectations of financial analysts. A recent estimate places the value of the social network at $380 billion.

In reflecting on the last 10 years, Zuckerberg says that Facebook just cared more about connecting the world than anyone else. He and his co-founders were just students, with few resources.

"While some doubted that connecting the world was actually important, we were building. While others doubted that this would be sustainable, you were forming lasting connections," he wrote.