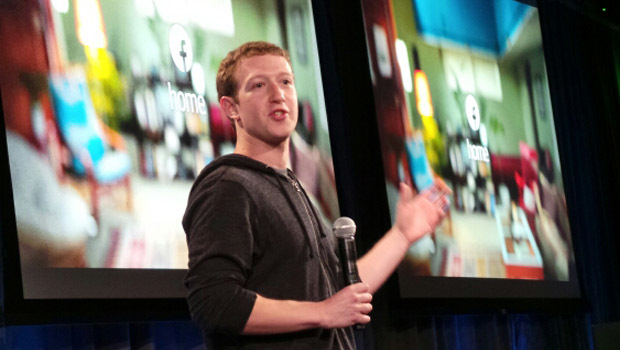 Facebook says it wants to flip the smartphone focus from apps to people.

At a press event in Menlo Park, Calif., Thursday, CEO Mark Zuckerberg kicked off the announcement by joking: "Today, we're going to finally talk about that Facebook phone."

Zuckerberg went on to elaborate that the company is not announcing a new phone or operating system. Instead, the social network is launching a new "experience" called Home, which is a collection of apps that features a home screen and user interface that is focused around Facebook.

Zuckerberg said mobile users spend about 20 percent of their time on Facebook.

"What would it feel like if our phones were designed around people, not apps?" Zuckerberg asked. One of the new features swaps out app icons for a friend's profile picture, when receiving notifications.

Chat Heads is a feature that works with text messages and chat messages. Users will see link share and status updates layered on top of a cover photo.

Users will be able to install Facebook Home through the Google Play store for Android devices.

Zuckerberg also announced that AT&T and HTC have built the first set of phones to integrate Facebook. HTC announced its new smartphone, the HTC First, which is pre-installed with Facebook Home.The device will come in four colors and be available on the AT&T network.

The HTC First will cost about $100 exclusively through AT&T and is available for pre-order now, and will arrive April 12.

On why Facebook would turn toward a deeper integration with mobile devices, Gartner analyst Brian Blau says that the move makes sense.

"It's natural to think that Facebook would want to think they would want to improve their own services on mobile," Blau told CBS News over the phone. "Why not give them a more fully featured offering?"

Integration with an operating system would move Facebook away from being a stand-alone app to being the part of the mobile device itself.

But does a Facebook phone make sense? The battle over mobile devices already has Apple, Google, Microsoft and BlackBerry in the ring - companies that have been at the game longer.

Facebook has recently launched a series of major changes to its service, including the introduction of Graph Search and the redesign of its News Feed and Timeline features.

Facebook was launched in February 2004 from Zuckerberg's dorm room at Harvard University. The social network reports over 1 billion monthly active users as of December 2012.