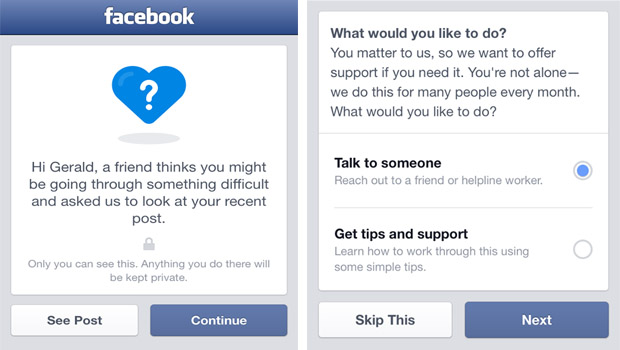 To date, social media has played a disturbing role as a place where people -- often very young people -- have announced their intention to and been driven to kill themselves. Now, Facebook is trying to change that.

Facebook worked with mental health organizations including the National Suicide Prevention Lifeline to "provide more resources, advice and support to people who may be struggling with suicidal thoughts and their concerned friends and family members."

The company announced a new tool that allows users to report to Facebook if a friend has posted a threat to commit suicide. These reports will be reviewed by teams who can "send help." The poster in question may receive a private message from Facebook saying, "...a friend thinks you might be going through something difficult and asked us to look at your recent post."

It will then direct the person to options to talk to a friend or helpline worker, or to get tips and support.

In 2010 Rutgers student Tyler Clementi killed himself after bullying and harassment -- much of it online -- from his college roommate. Before hurtling himself into the Hudson River, Clementi left a message on Facebook: "jumping off the gw bridge sorry."

That was only months after Long Island teen Alexis Pilkington took her own life following vicious taunts on social networking sites,which persisted postmortem on Internet tribute pages, worsening the grief of her family and friends.

Facebook's new features will roll out over the next couple months and will also offer support to concerned friends and family.

Encrypted messages: Does the government need a way in?