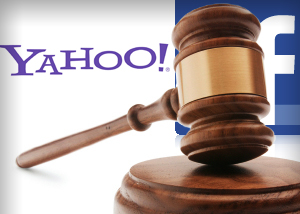 (CBS/AP) NEW YORK — Facebook is stepping up its patent dispute with Yahoo by filing its own lawsuit against the struggling Internet icon.

Facebook denied Yahoo's allegation in Tuesday's filing and accused Yahoo of violating 10 of its patents covering photo tagging, advertising, online recommendations and more. Facebook said it has been "irreparably harmed" by Yahoo's infringement.

"While we are asserting patent claims of our own, we do so in response to Yahoo's short-sighted decision to attack one of its partners and prioritize litigation over innovation," Ted Ullyot, Facebook's general counsel, said in a statement.

Yahoo said it had just received Facebook's lawsuit. The company said the complaint appeared on its face "without merit and nothing more than a cynical attempt to distract from the weakness of its defense."

"As we have made clear from the outset, the unauthorized use of our patented technology is unacceptable and must be resolved appropriately," Yahoo said in its statement. "Other leading companies license these technologies, and Facebook must do the same or change the way it operates."

Facebook recently acquired 750 patents from IBM Corp. that cover technologies that deal with software and networking. At the end of 2011, Facebook had just 56 U.S. patents, a relatively small number compared with other big tech companies. Yahoo Inc. owns more than 1,000 patents.

Facebook Inc., which is based in Menlo Park, Calif., filed the lawsuit in federal court in San Francisco. It is seeking a jury trial and unspecified damages, and for Yahoo's suit to be dismissed.