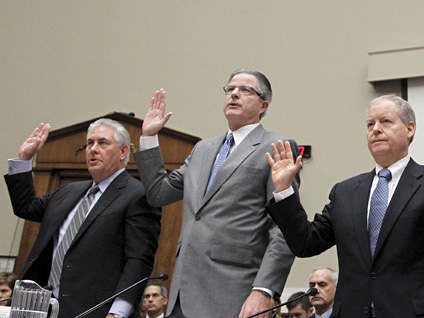 As oil executives are testifying before the House Energy and Commerce environment subcommittee, BP's sub-sea well continues to spew millions of gallons of oil into the Gulf.

President Obama, visiting the Gulf coast Tuesday, tried to be a little upbeat, saying that the Gulf will recover from the oil spill and "thrive again." But there isn't much to be upbeat about just yet.

The ruptured well has leaked over 100 million gallons of oil into the Gulf so far, according to worst-case-scenario estimates. But even half that number is an unmitigated disaster. BP has been able to siphon off only a small percentage of the well's output, and it's unclear exactly when the flow of oil will stop, despite hundreds of world-class scientists and engineers working overtime on the problem. They can't even agree on a flow rate for the oil spewing out of the seabed.

It turns out that deep-water oil drilling is a very risky business. In their testimony before the subcommittee, oil executives maintained that BP diverged from industry standards. "This incident represents a dramatic departure from the industry norm in deepwater drilling," Exxon Mobil Chairman and CEO Rex Tillerson said in his prepared testimony before the subcommittee.

Upon questioning by the subcommittee about the spill, Tillerson stated, "We are not well equipped to handle them. That's why we need an emphasis on preventing them from occurring."

If it's the case that oil companies, who made $300 billion in profit over the last few years, are not well equipped to handle a spill, then why are they allowed to proceed in such a risky business? The worldwide hunger for oil and corporate profits (profits in the five oil companies increased from $28 billion in 2002 to $64 billion in 2009) provide a logical answer.

Tillerson says that his company doesn't "proceed with operations if we cannot do so safely."

Was the BP well a once-in-a-lifetime, black swan event, or are there other deep-water wells at risk of  catastrophe? The oil executives were asked by Rep. Charles Gonzales, D-Texas, whether they could say their operations were 100 percent safe.  "No, I cannot," Tillerson responded.

Rep. Ed Markey, chairman of the subcommittee, said that the assembled companies earned almost $300 billion in profit over the last three years, but spent only one-tenth of 1 percent of that profit on safety and spill response.

He noted that the response plans of BP, ExxonMobil, Chevron, ConocoPhillips and Shell Oil -- all represented at the hearing -- cited identical response measures and "tout identical ineffective equipment." Two of the plans examined list the phone number a deceased expert, Markey said, and three include references to protecting walruses, which are not native inhabitants of the Gulf of Mexico.

It would appear that  BP, ExxonMobil, Chevron, ConocoPhillips and Shell Oil are cutting some corners on their spill response planning, and are not fully prepared for a "Nightmare well" event.

We can only hope that, unlike BP, the other four oil companies are not cutting corners on their deep-water oil drilling. Because as ExxonMobile's Tillerson said, they aren't well equipped to handle a spill.