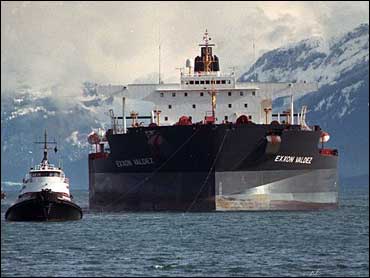 John Platt - a fisherman from Cordova, Alaska - made a pretty penny in the good old days. That was back in the 80's when an Alaskan fisherman could work hard and make a good living.

That was then. This is now. "My current financial situation is terrible," Platt says, "It's terrible."

He still earns his living fishing. But today Platt is deep in dept. He's waiting on a check he will never cash.

"My net worth is negative right now," he says. "Negative."

Platt is one of the 32,000 original plaintiffs in a lawsuit against corporate giant Exxon Mobil following the Exxon Valdez oil spill in 1989, reports CBS News chief national correspondent Byron Pitts.

Eleven million gallons of oil spilled along 1,300 miles of Alaskan coastline. The fishing industry was devastated. It was the worse disaster of its kind in U.S. history.

Back in 1989, Exxon executives, including Don Cornett, promised to take care of everyone affected by the spill.

"You have my word we will make you whole again," he said at the time.

In total, Exxon spent more than $3.8 billion in clean up costs, fines and compensation. But in 1994, an Anchorage jury found Exxon acted recklessly and awarded victims of the spill $5 billion in punitive damages. An appeals court later cut that award in half.

But after nearly 15 years in appeals, the case finally reached the U.S. Supreme Court last year. The justices reduced that $2.5 billion in punitive damages to just more than $507 million.

Platt's share of the settlement is expected to be close to $400,000. But he still owes the state of Alaska $600,000 for his commercial fishing licenses. So his check will go straight to the state. But here's the kicker: he has to pay the taxes on it.

"A lot of people aren't going to make it," warns Platt.

"I think that's been Exxon's strategy every step of the way - to wear everybody down," says Sen. Lisa Murkowski, R-Alaska. "They've succeeded in fatiguing those who were entitled to this compensation."

Osa Schultz and her husband got their checks last month of more than $50,000. They are still in debt.

"We always expected that the settlement would make a big difference and bring us back," she says. "It didn't even come close."

Shultz testified before Congress last year about the corrupting influences she says big business has on the political and legal system.

Shultz warned officials that, "Exxon's vast power and influence has tipped the scales of justice. For nearly a generation our community has been the David to their Goliath."

For its part, Exxon Mobil declined a CBS News request for an interview, instead issuing this statement saying in part, "The Exxon Valdez oil spill was a tragic accident and one which the company deeply regrets."

Nearly 20 years later the legal battles are not over. Both sides are awaiting an appeals court decision to see if Exxon Mobil has to pay interest on the $507 million award. That decision could come as soon as this month.