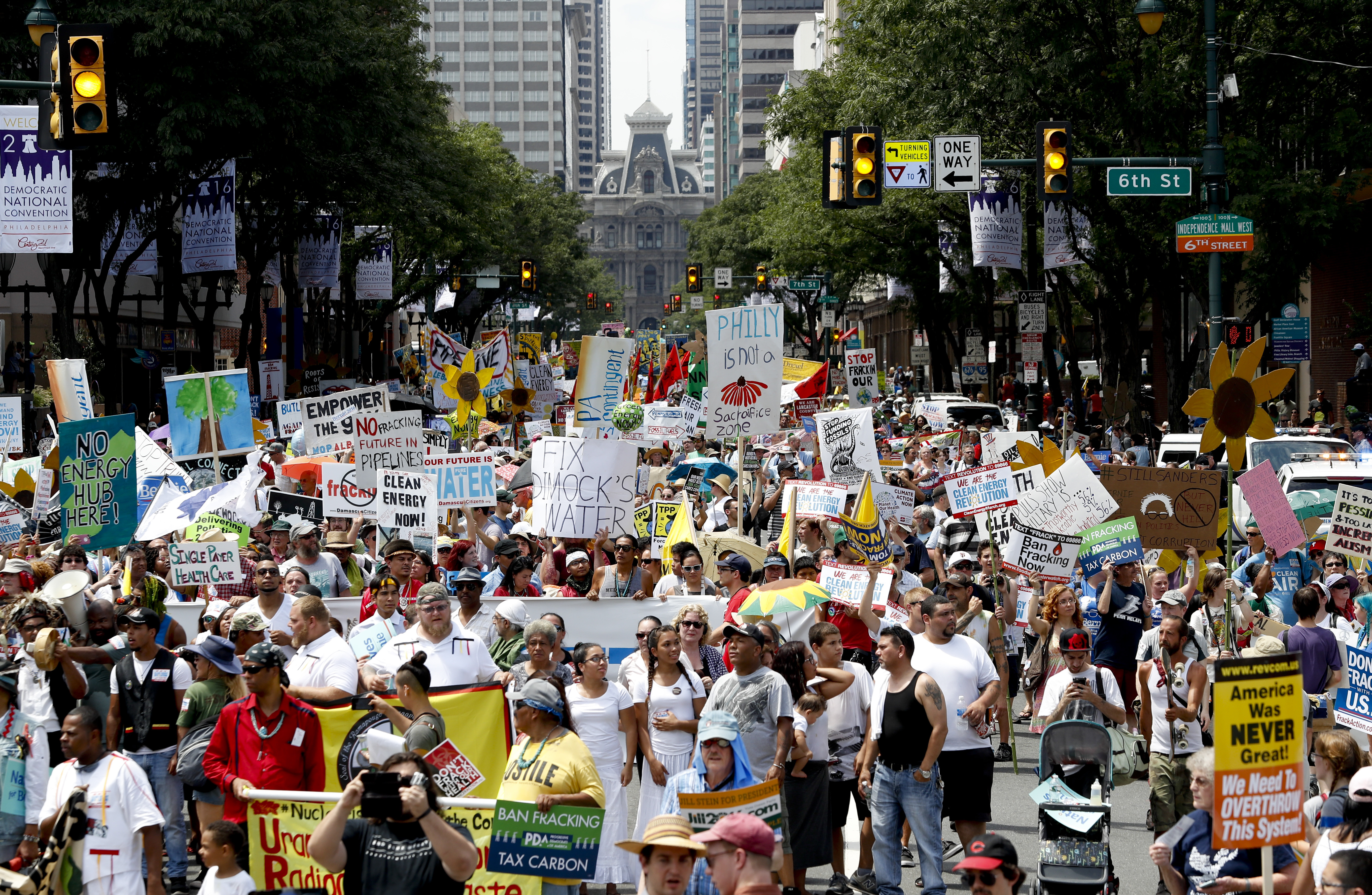 PHILADELPHIA -- Thousands of demonstrators took to Philadelphia's sweltering streets Sunday, cheering, chanting and beating drums in the first major protests ahead of the Democratic National Convention, as the city wilted during a heat wave.

Throngs of Bernie Sanders supporters marched down a main thoroughfare to show their support of him and disdain for Hillary Clinton ahead of the convention.

Chanting "Hell No, DNC, we won't vote for Hillary" and "This is what democracy looks like," the marchers headed from City Hall down Broad Street, the main north-south artery that leads from the city center to the convention site about 4 miles away.

Though planned for months, Sunday's marches came as fractures appeared in the party that had been trying to display a show of unity in recent weeks. Debbie Wasserman Schultz resigned Sunday as Democratic Party chair over an email suggesting the DNC had played favorites for Clinton during the primary. It was a stunning leadership shakeup as party officials gather in Philadelphia to nominate Clinton.

The Democrats had been trying to avoid the divide that was apparent in Cleveland during the Republican National Convention last week. But the hacked emails, published by Wikileaks, further fired up Sanders supporters, who long accused the party of favoring Clinton despite officially being neutral.

Sanders had called for Wasserman Schultz's resignation, and said Sunday night she made the right decision for the party's future by resigning.

Darcy Samek, 54, traveled alone from Minneapolis to protest through the four-day convention. She said Wasserman Schultz has been a "miserable failure" who needed to be gone.

"Everyone kind of knew (the Democratic party was against Bernie Sanders), but that doesn't mean it will change now that it's proven. It's just more of the same," she said.

Philadelphia Police Commissioner Richard Ross and other officers walked alongside Sanders protesters. Ross said he liked what he saw Sunday: a peaceful protest.

Ross -- speaking at the Emergency Operation Center on Spring Garden on Sunday -- said they are ready to handle the masses and don't expect any problems, CBS Philly reported.

"We have done a significant amount of planning with the protesters, as to everyone's expectations, there's and ours," he said.

Standing with Mayor Kenney and other emergency officials, Ross said they have watched the attacks unfold across the country, and tailored their plan.

"We have taken some additional security measures to assure the safety of both the protesters, the police and the public in general," he said.

CBS News homeland security correspondent Jeff Pegues reported that within the last two weeks, SWAT teams, hostage rescue units, and counter sniper teams, tested their tactical response plan. They worked through different scenarios including an attack on a facility and an ambush on a motorcade. One other concern though is independent lone wolf attacks.

The heat wave that descended on the city was showing no mercy, with temperatures reaching the high 90s and the city under an "excessive heat" warning by the National Weather Service. It's expected to peak Monday, the convention's first day, with temperatures possibly hitting 100 degrees, but feeling 108.

Earlier Sunday, thousands of clean energy activists jammed a downtown street in their mile-long march from City Hall to Independence Hall, near the Liberty Bell. They held anti-fracking and anti-pipeline signs, some with illustrations like a train surrounded by a fireball and the words "No Exploding Trains." Others held "Bernie or Bust" signs.

Sam Miller, 82, traveled from Erie, Pennsylvania, to join the march that stretched several blocks and across a wide street as temperatures in the city soared into the mid-90s. He said he was inspired because "fracking is invading Mother Earth."

Like in Cleveland, police were using bicycles as barricades along the streets, and volunteers were handing out water to marchers. Shoppers came out of stores to watch the march like a parade.

Chants of "Bernie! Bernie!" were met by counter echoes of "Hillary! Hillary!"

Some of the largest protests and demonstrations start about 4 miles north of the arena where the convention is being held. In Cleveland last week, most protests during the Republican National Convention were concentrated in a tight, 1.7-square mile zone downtown. A heavy police presence and fewer than expected protesters helped keep the calm. There were only about two dozen arrests and no significant injuries.

More than 5,000 delegates are among the 50,000 people set to attend the gathering at the Wells Fargo Center in South Philadelphia, which is expected to culminate with Clinton being named the party's official nominee for president.

The former secretary of state and first lady has named Sen. Tim Kaine of Virginia as her running mate.