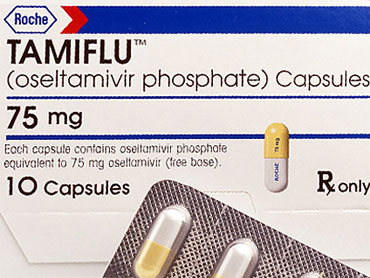 An updated review of data about the effectiveness of Tamiflu, the antiviral drug most commonly used against influenza, says there is no clear evidence that it prevents complications like pneumonia in otherwise healthy adults.

According to an article published by the British Medical Journal (part of a joint investigation by BMJ and Britain's Channel 4 News), the study acknowledges that oseltamivir and other neuraminidase inhibitors have a modest effect in reducing flu symptoms and infectivity in otherwise healthy adults by about one day.

But researchers said there is insufficient published data to know if oseltamivir reduces complications in otherwise healthy adults.

The new study updates a 2006 review published in The Cochrane Library.

Because of a "paucity of good data" from trial authors and Roche, the drug's manufacturer, and the inability to independently verify results of eight key trials which were never fully published (but which were included in the 2006 review) the researchers concluded they have no confidence in claims that oseltamivir reduces the risk of complications of influenza in otherwise healthy adults.

They said they do not believe it should be used in routine control of seasonal influenza.

They also called on governments to set up studies monitoring the safety of neuraminidase inhibitors.

After reviewing observational studies provided by Roche to the Cochrane review's authors, Professor Nick Freemantle and Dr. Melanie Calvert of the University of Birmingham wrote that "oseltamivir may reduce the risk of pneumonia in otherwise healthy people who contract flu. However, the absolute benefit is small, and side effects and safety should also be considered."

They said interpretation of data was difficult in part because "It seems likely that some patients were included in more than one study, which undermines the ability of these studies to provide independent estimates."

Freemantle said he sees "very little evidence to support the widespread use of oseltamivir in the otherwise healthy population who are developing signs of influenza-like illness."

Governments have stockpiled Tamiflu as part of pandemic preparedness plans, in part because of claims that the drug prevents complications.

"Governments around the world have spent billions of pounds on a drug that the scientific community now finds itself unable to judge," she said in a statement.

But the World Health Organization disagreed. They said data from countries around the world show that when given early, Tamiflu can reduce the severity of swine flu symptoms, though the agency recommends the drug be saved for people at risk of complications, like pregnant women, the elderly, children, and those with underlying medical problems.

"This will not change our (Tamiflu) guidelines," said Charles Penn, a WHO antivirals expert.

Penn said that while past studies show Tamiflu only has a modest benefit, when patients with severe illness or at risk of complications are treated early, there are fewer hospitalizations and deaths.

Both the British researchers and WHO said there is little evidence to support the widespread use of Tamiflu in otherwise healthy people - precisely the policy Britain has adopted to fight swine flu.

In addition to recommending Tamiflu be saved for at-risk groups, WHO recommends Tamiflu only be used on a doctor's recommendation.

In Britain, however, Tamiflu is regularly dispensed to healthy people who catch the flu. The drug is given out via a national swine flu hotline by call center workers with no medical training.

The Switzerland-based Roche recently announced revenues from the sales of this drug were $2.5 billion this year.

In an editorial in the BMJ, Dr. Fiona Godlee and Professor Mike Clarke, Director of the U.K. Cochrane Centre, say the updated review is important because it calls into question "not only the effectiveness of oseltamivir but the whole system by which drugs are evaluated, regulated and promoted."

They call for new global legislation to ensure that "once a trial is completed, there needs to be ready access to the raw data behind any analyses used to license and market a drug.

"When vast quantities of public money, and large amounts of public trust, are placed in drugs, the full data must be accessible for scrutiny by the scientific community," they write. "Pending full disclosure and independent review of the raw data from Roche, the risks and benefits of oseltamivir remain uncertain."

In response, Roche said that they "firmly believe in the robustness of the data," and say that full access to data has been granted to Governments and regulatory authorities.

As a result of the BMJ/Channel 4 investigation, Roche announced it will make all study summaries of oseltamivir (including key data) available on a password-protected Web site.