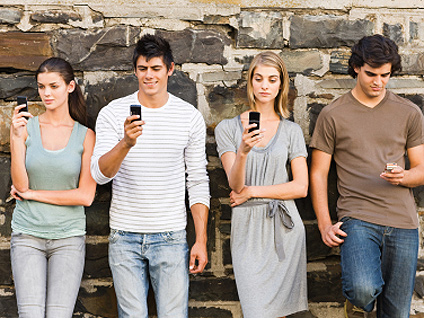 Parents have a tough enough time deciding if their kids should have cell phones. Now they're facing more conflicting data on whether cell phone use increases the risk for brain cancer.

A new study says no, but some doctors say not so fast.

On "The Early Show" CBS News Medical Correspondent Dr. Jennifer Ashton shared the story of mother Cheryl Greenwald and her 11-year-old daughter Rebecca Greenwald who says she can't live without her cell phone.

Rebecca told CBS News, "In fifth grade, like, all my friends have it now. Fifth grade from the start to the end people kept getting them."

Cheryl said, "I try to make decisions based on risk to my children, and in this case, it wasn't something that really bothered me."

But now Cheryl's relieved to hear about a new study that found cell phone use does not cause brain cancer in children and teens.

Researchers in Switzerland found that children who use cell phones are at no greater risk for brain cancer than those children who have never used a cell phone. In the study, researchers compared cell phone use in healthy children and 352 brain tumor patients between the ages of 7 and 19. Cell phone use did not significantly increase the risk of a brain tumor. The study appears in the Journal of the National Cancer Institute.

This study's results come just two months after the World Health Organization concluded that cell phones could "possibly" cause cancer putting them in the same category as engine exhaust and chloroform.

"What we know is that the microwave radiations from cell phones will penetrate deeper into the child's brain," Black said. "And more of the radiation goes into their brain because their scalp is thinner, their skull is thinner."

Seventy-five percent of teenagers are now using cell phones - up 45 percent since 2004, according to the Pew Research Center.

Black said, "The question is, the child that begins using the cell phone at 7 or age 12, when they're 47, after four decades of using a cell phone is their risk of developing brain cancer higher."

For Rebecca, no matter where the debate falls, her cell phone is something she will continue to rely upon.

"I like to call my mom you know after activities, text my friends, see what they're doing," she said.

Ashton added on "The Early Show" that the research was based on association, not cause-and-effect

"When you look at brain cancer, you have to follow these kids 10, 20, 30 years into the future," she said. "The good news is, most children - mine included - are using their cell phones to text as communication, not holding it up to their ear."