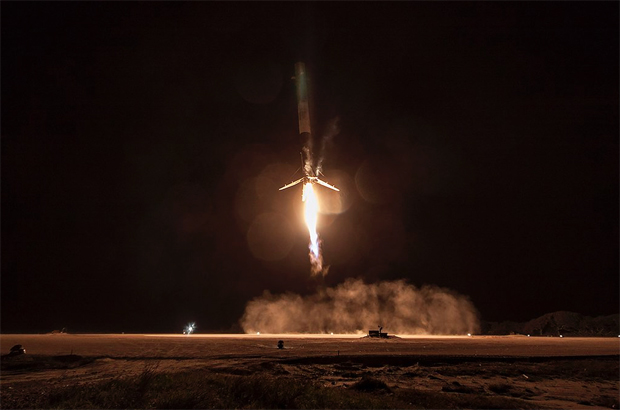 The successful launch and landing by the first stage of a SpaceX Falcon 9 rocket Monday was a significant step toward achieving reusability and, eventually, lowering launch costs, but turning that success into operational reality poses a significant challenge for company founder Elon Musk, space experts said Tuesday.

"The ability to examine the stage after it has survived the stresses of flight, to put it through qualification and flight acceptance tests to verify and gain confidence in its condition, is the first step toward economical re-use of the launch vehicle," he said in an email exchange.

"Further, the demonstration of supersonic retrograde propulsion -- restarting an engine in supersonic flight and using it to fly back home -- is important to future attempts to land large, heavy payloads on Mars. This was a marvelous flight test, the first step along an important road."

John Logsdon, a noted space historian and founder of the Space Policy Institute at George Washington University, agreed, adding that the key to reusability, and lower launch costs, will be quick turnarounds and low refurbishment costs. And that will depend on how the boosters are affected by the stresses of launch, re-entry and landing.

The successful landing "could be very significant, and the conditional is because we have to see what's required to refurbish and relaunch this stage," Logsdon said in an interview. "It was an important first step. You can't re-launch until you recover (the hardware). So showing you can recover it is a big deal."

The Falcon 9 rocket blasted off Monday evening from the Cape Canaveral Air Force Station, making SpaceX's first flight since a catastrophic launch failure last June. The primary goal of the mission was to boost 11 Orbcomm data relay satellites into orbit, which was successfully accomplished within about 20 minutes of liftoff.

But SpaceX had two other major objectives. First, the company put an upgraded version of its Falcon 9 to the test for the first time, using cryogenic propellant cooling and "densification" to increase launch thrust. And, of course, the company carried out the first successful landing of a rocket stage used to help boost a payload to orbit.

Musk believes lowering launch costs is critical for the commercial space industry, and that requires recovery, refurbishment and reuse of booster stages. In a post-launch conference call, Musk said the recovered stage will be inspected and used for ground tests but if all goes well, another recovered stage may be re-launched sometime next year.

The key, Logsdon said, is how much work is required to return a used rocket to launch readiness.

"SpaceX has to find out how close to launch ready it is upon return, how much processing are they going to have to do before it's ready to operate in the launch environment again," he said. "And that's an unknown.

"I think the business case depends on launching frequently. There has to be costs of refurbishment. I remember seeing Elon in a ceremony once, saying his goal is just to have to pay for the fuel for the second flight. ... But it will be a while before he can do that."

During his conference call Monday night, Musk said a Falcon 9 currently costs about $60 million to build and launch. But propellants only account for about $200,000 of that total. And that, he said, "means that the potential cost reduction over the long term is probably in excess of a factor of 100."

"I think this is quite significant," he said. "I do think it's a revolutionary moment. No one has ever brought a booster, an orbital-class booster, back intact. ... We achieved recovery of the rocket in a mission that actually deployed 11 satellites. I mean, this is a fundamental step change in technology compared to any other rocket that has ever flown."

"Kind of the holy grail is if you can reuse a space vehicle, you then can bring the costs down," he said in an interview. "The trick is going to be in refurbishing. That's where we didn't make the mark in space shuttle, because the refurbishment of the shuttle was so expensive. (The Falcon 9) is a simpler vehicle, we're really just talking the engines, some structure and the plumbing."

But rocket engines are high performance machines with little margin for error and "whether or not this is a really practical thing to save money depends on how much work goes into refurbishing them," he said. "That's kind of the key thing. It could save a lot of money, or wind up like the shuttle and not save anything."

But, he added, "let's applaud the accomplishment. It was a really spectacular technological accomplishment. Whether or not they can make the business case work depends on the next step."

"Washington is pretty much littered with space transportation studies that say the only way that space is going to open up as a regular development area is through reusability," she told CBS News. "It's taken us 50 years to get there, but I think we're a step closer now."

In her view, the political cost of failure prevents governments from taking on high-risk space projects.

Blue Origin plans to use the rocket to boost passengers out of the atmosphere for brief forays in weightlessness before the New Shepard crew capsule returns to Earth by parachute. The booster, like the Falcon 9 first stage, is designed to make a tail first, powered descent to touchdown for refurbishment and reuse.

Blue Origin also plans to build a rocket manufacturing facility near Cape Canaveral and to develop a much more powerful orbital rocket to launch satellites and, eventually, people.

The presumed "space race" between the two billionaires has triggered widespread chatter in social media circles even though the rockets currently in operation or development are not in competition.

After the successful New Shepard test flight, Musk tweeted his congratulations, but went out of his way to point out that Bezos' rocket was strictly sub-orbital and did not have to endure the same stresses as a Falcon 9 first stage returning from an orbital mission.