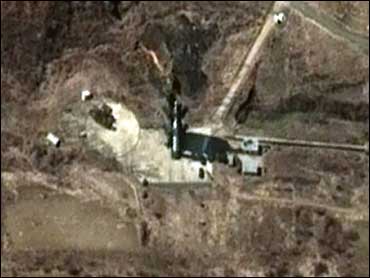 North Korea is believed to have several nuclear warheads that could be mounted on a missile, an international security expert said Tuesday ahead of a rocket launch that regional powers suspect will test weapon delivery technology.

But Daniel Pinkston, a Seoul-based expert for the International Crisis Group think tank that provides detailed analysis about North Korea's nuclear program, stressed it is unclear if the communist nation has mastered the technology necessary to miniaturize the warheads and put them on Rodong missiles, which have a range of 620 to 930 miles. The North is believed to have five to eight warheads, he said.

North Korea says it will send a communications satellite into orbit between April 4 and 8. The U.S., South Korea and Japan think the communist regime is using the launch to test long-range missile technology, and they warn Pyongyang would face sanctions under a U.N. Security Council resolution banning the country from ballistic activity.

Japan is particularly concerned because the North has designated a zone near Japan's northern coast where debris could fall. Tokyo has deployed battleships and Patriot missile interceptors to protect the area and Tokyo. The North reiterated Tuesday that any attack on its satellite would be an act of war; Japan has said it will only try to protect itself from debris if the launch fails.

"North Korea should listen to the international community, and we strongly urge the North to refrain from the launch," said a resolution passed unanimously in both houses of Japan's parliament. Prime Minister Taro Aso said Tokyo will take the issue to the U.N. Security Council for possible punishment if the launch takes place.

"It would be crucial for the international community to make concerted action," Aso told a news conference.

Pyongyang's official Korean Central News Agency claimed Japan is trying to blow the rocket launch out of proportion to justify developing its own nuclear weapons program and divert attention from political problems.

If Japan tries to intercept the satellite, the North's army "will consider this as the start of Japan's war of re-invasion more than six decades after the Second World War and mercilessly destroy all its interceptor means and citadels with the most powerful military means," KCNA said.

In a separate dispatch, KCNA accused the U.S. and South Korea of conducting about 190 spy flights over North Korean territory in March, including over the sea off the launch site on its northeast coast.

China, North Korea's neighbor and often-estranged ally, continued to appeal for all the powers in the region to show restraint and "refrain from any action that would further complicate the situation," Chinese Foreign Ministry spokesman Qin Gang told reporters in Beijing.

Pinkston said the communist nation has two underground nuclear warhead storage facilities near bases for its medium-range Rodong missiles, which are capable of striking Japan.

He said he obtained the information from intelligence officials from a country or countries that he wouldn't identify.

"Their assessment is that North Korea has deployed" and assembled "nuclear warheads for Rodong missiles," Pinkston told The Associated Press.

Kim Tae-woo, a missile expert at the state-run Korea Institute for Defense Analyses in Seoul, said the North has been focusing on efforts to mount nuclear warheads on the Rodongs because the long-range Taepodong series has not been fully deployed yet.

"Rodong is the most likely weapon to be mounted with nuclear warheads," Kim said. He said it's also "natural" for the North to try to put a nuclear warhead on a missile with a longer range.

Two U.S. destroyers are believed to have departed from South Korea to monitor the rocket launch. South Korea is also dispatching its Aegis-equipped destroyer, according to a Seoul military official who asked not to be named, citing department policy.

The two allies conducted large-scale annual exercises for 12 days in March, prompting angry reaction from Pyongyang, including threats to South Korean passenger planes and a repeated halts in cross-border traffic.

Adding to the complexity of the situation on the Korean peninsula, the North announced Tuesday that it will indict and try two American journalists accused of crossing the border illegally from China on March 17 and engaging in "hostile acts."

The North may try to use the detentions as a bargaining tool after the rocket launch, said Yang Moo-jin, an analyst at Seoul's University of North Korean Studies.

Separately, a South Korean worker was detained Monday at a joint industrial zone in the North for allegedly denouncing Pyongyang's political system and inciting North Korean workers to flee the communist country.